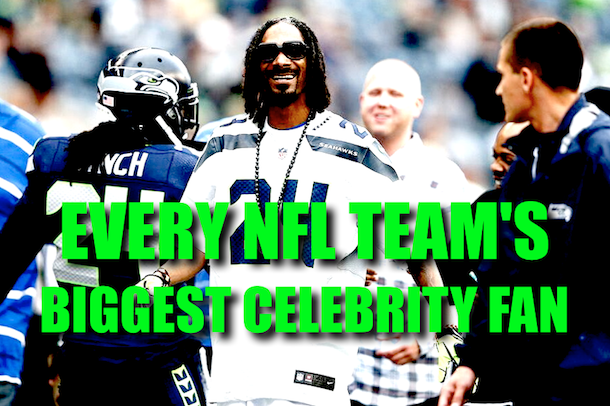 The NFL, as everyone knows, is the biggest pro sports league in the world. Sure, no one outside North America really knows anything about it, but 20 of the 30 most valuable sports franchises in the world are NFL teams, and all 32 teams are in the top 50. Even the Jaguars.

So in economic terms, yeah, the NFL is tops. And in the United States, at least, the NFL is tops culturally, too. Baseball may be America’s pastime, but the NFL is everywhere, from politics and business to arts and entertainment. In fact, it’s so pervasive that every NFL team has at least one famous fan. Even the Jaguars.

Don’t believe it? Here’s a list to prove it. You probably know about some of these famous NFL fans already, but others may surprise you.

And the rankings? Well, they are based not so much on the total level of star power in a given team’s fanbase, but according to how surprised I was while doing my research. (Which is to say, they’re subjective, so relax.)

Let’s get started, shall we?