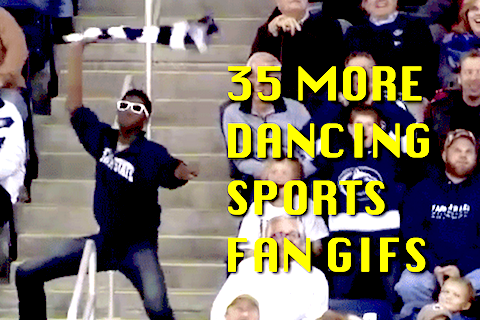 Back in the day, if a fan did something notable at a sporting event, they got their moment on the jumbotron and that was it. One quick moment in the spotlight, then nothing.

Now it’s different. If you do something notable these day it gets caught on camera by somebody, and then it gets published on hundreds of sports websites and blogs. After that it’s turned into a GIF and it spreads all over the internet—meaning that one single moment lives on forever.

It’s kind of crazy when you think about it.

In any case, today we’re going to give you a whole list of such moments. Some of these people would probably rather have these moments back. Others might be proud of their internet fame. Either way, they’re all entertaining.

So sit back and check out 35 more dancing sports fan GIFs. You won’t regret it.

The chick on the right is dancing like she's at a Phish concert, while the guy in the white suit is dancing like Ed Grimsley. Meanwhile, the guy on the far left is wearing gold booty shorts. So yeah, this one has pretty much everything.

They know how to boogie in the bayou.

This guy is way less cool than the last guy.

This poor guy wasn't nearly as impressive as the beer made him think he'd be.

Apparently this guy was celebrating a home run. I'd say it must have been an important one, but we're talking about the Royals, here.

This kid's not going to let a little rain spoil his chance to make a fool of himself.

Not to be outdone by the Mizzou kid, here's this guy...yikes.

No arthritis here. This guy is pretty limber for his age.

Get it? Dancing penguins? Happy Feet? Seriously, though, I have no idea what's going on here, but it probably has something to do several cases of beer and somebody finding a good deal on penguin costumes.

You can just tell this guy knows how to party. I mean, look at that hat.

Where have all the Notre Dame fans gone this season?

The guys in the booth got a big kick out of this woman's dance skills, so they sent their roving reporter down to talk to her. But this wouldn't be the last time we saw her...

Yep, that's right. A camera guy spotted her in the crowd at another game–yes, she actually went to two Houston Astros games this year—so they put her on TV again.

I don't know if the woman on the left is the kid's mom or not, but she seems fairly concerned that he might just be embarrassing himself on television. (And I'd say her concern was justified.)

As a general rule of thumb, if you want to avoid looking like an idiot while dancing, keep your arms to your side. In fact, I'm pretty sure there's an entire Will Smith song about this.

Yep, this is one of those moments that these guys are going to want back when they graduate and start looking for work.

Check out the reaction from this dude's lady friend. I think she'd be more comfortable if he sat the hell down.

There's a lot of stuff going on in the background here, but the best thing has to be the guy holding the pretend axe while doing the robot. (FYI, USC was playing Stanford, whose mascot is a tree. Hence the axes and chainsaws.)

That's the problem with hot chicks—when they're at the club, nobody tells them that they suck at dancing, so they just don't know.

How appropriate, given that this month marks the 30th anniversary of Michael Jackson's iconic "Thriller" video. (It came out December 2, 1983.)

Don't you wish this was your mother? Sure, she might embarrass you by dancing like this on TV, but at least she's not a stick-in-the-mud.

Seriously, this goes on every night inside "The Clevelander" nightclub inside Marlins Park. Wholesome family entertainment, right?

This guy is actually at a Rays game. Obviously he got pretty bored, and probably a little over-served.

Does this remind any one else of Elaine dancing on Seinfeld?

Unlike the other dad we saw from Seattle, this guy does not have the full support of his daughters here.

Hey, is that Usher?

Someone get this man some glow sticks.

I've seen dance-offs at sporting events before, but never anything this amazing. These two are the best.

Imagine you're at a Portland Trail Blazers game, and suddenly your section turns into some sort of weird S&M club. That would be awkward, no?

So this is why people still go to Buffalo Bills games.

I knew this guy reminding me of somebody!