>Total Pro Sports
NFL
Kelvin Sheppard Slaps Around Colts Teammate Laron Landry, Who Was Down on the Ground with a Concussion (GIF)

Kelvin Sheppard Slaps Around Colts Teammate Laron Landry, Who Was Down on the Ground with a Concussion (GIF) 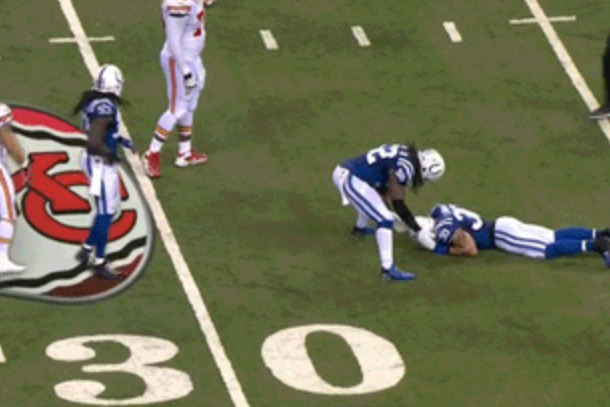 The NFL hasn’t always taken concussions as seriously as it should. That’s why they agreed to that $765 million settlement to pay for brain-related medical expenses of all former NFL players just before the 2013 season began.

However, these days things are different. Now every NFL team has a certified medical trainer who does nothing but watch the game from high above the field and look for potential head injuries. Then, when a head injury is suspected, the on-field medical staff administers the official “NFL Sideline Concussion Assessment Tool,” which starts off by asking players to rate their symptoms and then asks them a bunch of questions to discern their cognitive abilities.

You know what the NFL Sideline Concussion Assessment Tool does not call for? Slapping a potentially concussed player on the head repeatedly. But unfortunately, that is exactly what happened to Indianapolis Colts safety Laron Landry on Saturday. After getting clobbered in the head by the knee of Kansas City Chiefs RB Anthony Sherman, Landry’s genius teammate Kelvin Sheppard ran up to him and—while Landry was still lying face-first on the ground—started slapping him in the head.

Pro Tip: If your teammate is lying face-first on the ground, make sure he’s okay before slapping him silly.