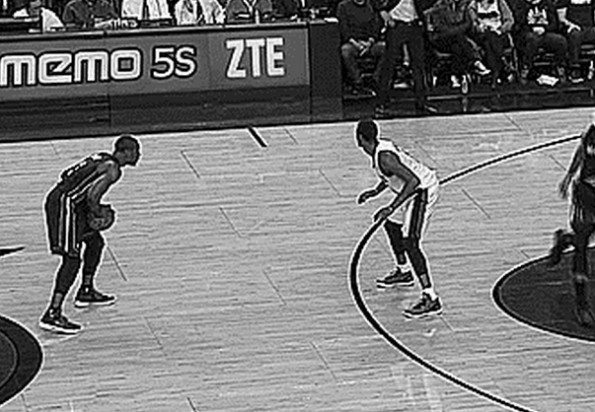 During a game against the Portland Trail Blazers on December 28, the Miami Heat’s Dwyane Wade packed his bags, grabbed his passport, and traveled his way around the court.  And much to the chagrin of one Redditor, who goes by the name of catanimal, D-Wade’s trip around the frontcourt went unnoticed by the officials.

According to catanimal, Wade takes a total of seven steps on the play.  And he provides the following statement, straight from the NBA’s website, to support his case:

Traveling: To start a dribble after establishing a pivot foot, the ball must be released from the player’s hand before his pivot foot leaves the floor or he has committed a traveling violation. A player who receives the ball while moving is allowed a two count rhythm but must release the ball prior to the third step touching the floor.When ending his dribble a player may use a two count rhythm in coming to a stop, passing or shooting. A player who fall s to the floor while holding the ball or while coming to a stop may not gain an advantage by rolling on the floor. A player who attempts a shot may not be the first to touch the ball if it fails to touch the backboard, rim or another player. If a player comes to a stop on the count of one when both feet are on the floor or touch the floor simultaneously, he may pivot using either foot as his pivot. If he alights with both feet he must release the ball before either foot touches the floor. If a player has one foot on the floor or lands with one foot first to the floor, he may only pivot with that foot. Once that foot is lifted from the floor to shoot or pass it may not return until the ball is released. If a player jumps off one foot on the count of one he may land with both feet simultaneously for count two. In this situation, the player may not pivot with either foot and if one or both feet leave the floor the ball must be released before either return to the floor. When a player gathers the ball he may not step consecutively with the same foot, as in a hopping motion.

Some have argued that, while Wade does travel, he doesn’t actually take seven steps.  Catanimal argues otherwise.  What do you think?