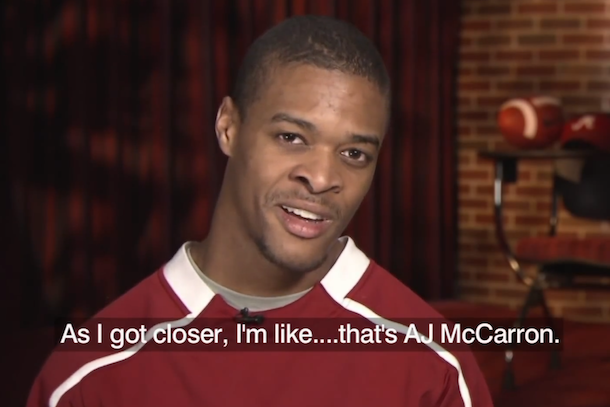 A few nights ago, after James Winston became the first quarterback not named A.J. McCarron to win a National Championship since 2011, A.J.’s hot mom got on Twitter and made an ill-advised comment about whether or not Winston was actually speaking English during his post-game interview. And seeing as how he was speaking English, many viewed the remark as…you know…racist. Dee Dee McCarron deleted it immediately, of course, and later apologized publicly. But it was out there and people saw it, so the damage was done.

Of course, it’s not fair to judge a man by something his (hot) mom says. But human nature being what it is, people are going to do that anyway. And for that reason, the video we have for you today could not have hit the interwebz at a more opportune time.

Why? Because it feature’s A.J. McCarron being a helluva nice guy and decidedly not racist. More specifically, it’s a story about how he befriended a Crimson Tide fan with cerebral palsy and got him a volunteer job as a team equipment manager. Take a look:

Hey, even an Auburn fan has to tip his hat to A.J. for this, right?