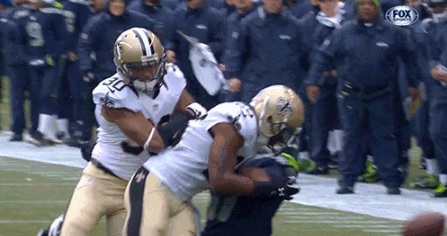 Call it bad luck, but Percy Harvin of the Seattle Seahawks had just begun what was supposed to be his triumphant return to the gridiron, after a hip injury had him sidelined for most of the NFL regular season, when a rough tackle by Saints safety Rafael Bush had him suddenly being tested for a new injury—a concussion.

The hit happened only two plays into Harvin’s start during yesterday’s NFC Divisional Round match-up against the New Orleans Saints, and it was so hard that it sent his mouthpiece flying.  After the hit, the NFL’s doctors tested him for a concussion, and surprisingly let him back on the field in under 10 minutes. Then, in the second quarter, Harvin received another big hit—this one from cornerback Malcolm Jenkins—and was taken out of the game for good (this time with an actual concussion).

It’s a harrowing look at the real physical consequences of the NFL’s high impact mode of play, which is garnering more and more controversy each week. As for Percy Harvin, hopefully he’ll have some better luck the next time he finds himself back on the field.

You can take a look at the first (and by far the most visually compelling) hit Harvin took during Saturday’s game in the GIF below: