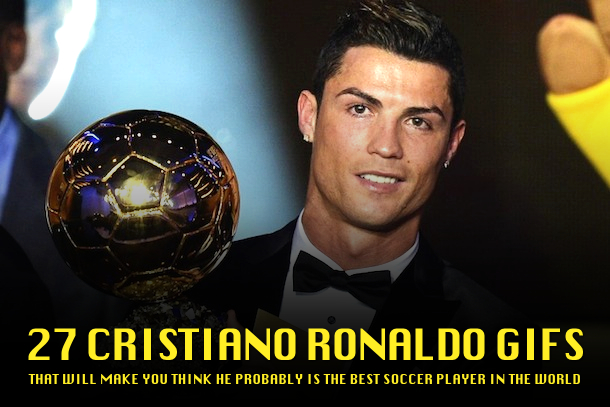 Cristiano Ronaldo is a guy that most soccer fans love to hate. He’s vain, pompous, arrogant, and just way too hairless. (Seriously, it’s unnatural.) That being said, only a crazy person would deny that Ronaldo is one of the top two or three players of his generation. In fact, you could make a very strong argument that he is the best.

Now, I’m not saying he is the best player of his generation. I still think it’s Lionel Messi. I’m just saying if someone makes a good case it’s kind of hard to refute. And in 2013, with Messi hampered by injury and Ronaldo playing the best soccer of his career, he was easily the right choice for the Ballon d’Or.

So today, instead of making fun of Ronaldo like I normally do, I’m going to show the guy a little love this list of awesome Ronaldo GIFs. After all, he is extremely talented. And who knows—maybe he’s just really misunderstood, and all the diamonds and fauxhawks are just a cry for help.