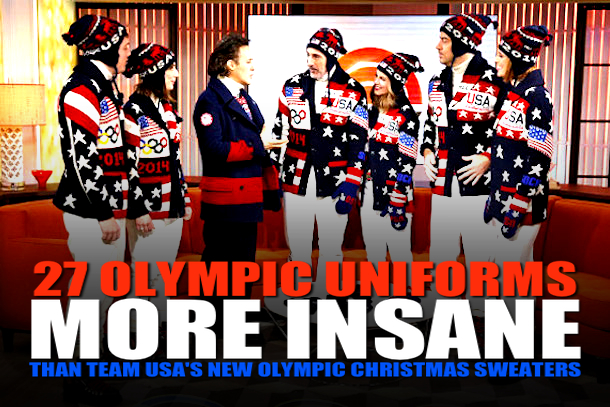 Yesterday American fashion icon Ralph Lauren went on the Today show and unveiled the uniforms Team USA athletes would be wearing at the opening ceremonies for the 2014 Winter Olympics in Sochi in two weeks. The verdict? Not so great. The unis are highlighted by a patchwork cardigan that looks like a Christmas sweater your aunt bought on clearance at Khol’s. And this, combined with the fact that it retails for a whopping $598, means Americans are not going to be caught dead wearing these things.

But hey, cheer up, America. Team USA’s new Olympic sweaters may be wacky, but they’re hardly the first ridiculous, over-the-top outfits to grace the Olympic red carpet. In fact, they wouldn’t even crack the top ten when it comes to insane Olympic clothing.

Don’t believe it? Just take a look at this list of crazy Olympic uniforms and see for yourself that it could have been so much worse.