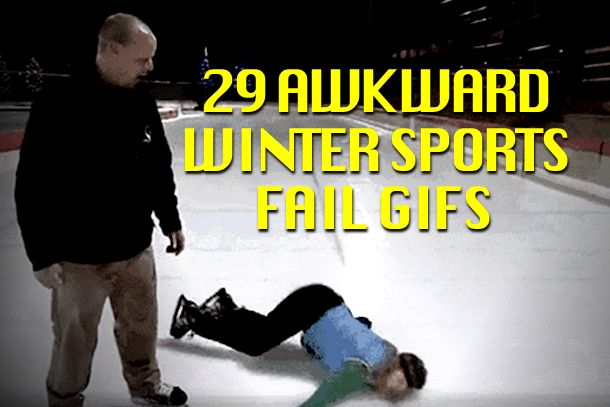 I’m sure the upcoming XXII Olympic Winter Games are going to features some truly incredible athletic performances that amaze and inspire us. However, the they will also certainly feature some truly epic fail, because, man, these sports are hard.

It’s not like the Winter athletes are just running and jumping and swimming, all of which come somewhat naturally to human beings. No, they’re flying down the side of a mountain with their feet strapped to a plank, or flying though the air doing summersaults, or sliding around on ice with razor sharp blades on their feet trying to do tricks. In all of these endeavors, the line between success and failure is razor thin.

So today, to get us all prepared for the 2014 Winter Games, here is a list of pretty awesome winter sports fails. Some of the athletes are highly skilled and some of them are not. However, they’re all really easy to laugh at from the comfort of your desk chair, so take a look.

Because that looks pretty painful

Usually they just worry about sticking the landing, but this poor woman needs to practice taking off.

I'm not sure what's going on here. It could be totally staged. But let's assume it's not, in which case this is pretty amazing.

Can you believe this intrepid reporter just got right up and continued her story? That's what you call professionalism.

Now that slopestyle skiing has been added to the Olympics program (much to the dismay of Bob Costas), you can look forward to lots of this. Well okay, probably not. The competitors are probably going to be a bit better than this guy.

I guess this technically isn't a fail since there was no collision, but I bet this chick sure felt like a failure at life when she soiled her pants.

Seriously, when you are ice skating, "heads up" isn't just some meaningless thing people say, like "have a nice day" or "bless you." You really should probably watch where you are going.

Don't think male figure skaters are tough? This guy flings this girl in the air, takes an elbow to the nose, but stays on his feet to catch her and finish the routine. He's like a hockey player in a leotard.

I guess every great Olympic freestyle skier had to start somewhere, right?

Seriously, I'm starting to get worried about how much I enjoy watching people fall on skis.

I guess she was like, if I'm going down buddy, you're going down.

Despite the fact that they now play it outdoors in Los Angeles, hockey is still technically a winter sport. So we had to include Patrick Stefan's whiffing on the open net. It's an all-time NHL classic.

See, it's funny because his skis get stuck in the snow.

This guy thought he was finally ready for some really big air. He was really wrong.

For future reference, fences are not meant to be jumped over on skis.

To plow face-first into a snowbank.

What can I say? Sometimes a goalie thinks the competition isn't fair, so he swats the puck into his own goal to cut the other guys some slack.

I don't know who this is or what it's from, but I assume this woman is deceased. Nah, I'm kidding! I'm sure she's totally fine. Maybe. (Alright, I found the video. She for sure lived.)

In retrospect, Jeffrey realized that having a car pull him along the snow-covered road on skis was probably not a good idea.

Downhill grocery cart skiing is pretty amazing, but obviously it's the sumo suits that make this one special.

I guess it was especially windy that day? I have no idea. I mean, what could be so hard about shooting off a huge ramp on skis and then sailing a hundred feet through the air like a flying squirrel?

Gross country skiing is really hard. I've done it. That being said, it's not that hard.

In the immortal words of the great Sisqo, "Baaaaa-beeee-eeee, that thong, tha-tha-tha-thong!"

It looks like somebody forget to fasten the skis to the boots. That's kind of a major oversight.

In pairs figure skating it's generally the men who lift the women. Because getting a piledriver on ice really, really hurts.