40 Funny Names from the 2014 Winter Olympics 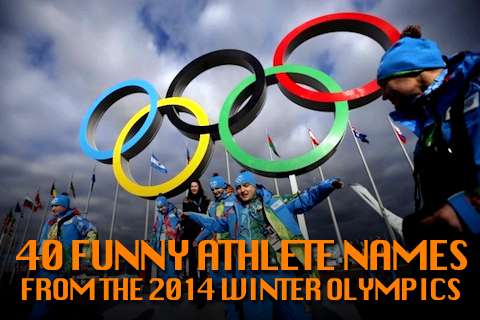 The Opening Ceremony of the XXII Olympic Winter Games is going on right now. Over 2,800 elite athletes from all around the globe are gathering in Sochi and celebrating this rare and beautiful time in which we all put aside our cultural, religious, and political differences and celebrate our common humanity.

But me? Yeah, I’m writing this list of Olympians with funny-sounding names. And you clicked your way here because you saw the headline and were curious.

However, before we begin, let me address some of the objections people might have to this endeavor.

“Don’t you think this is a little juvenile?” Answer: Yep.

“Why are you making fun of these hard-working athletes?” Answer: I’m not making fun of them. They’re all extremely accomplished and I admire all their hard work. However, if my name were Richard Patterson, I would fully expect people to find that humorous and would understand completely if they had a good laugh.

“Don’t you realize that the names you think are funny are totally normal names in that person’s own language?” Answer: Yes, obviously. Just like I’m sure names like “Frank Williamson” that don’t sound strange to us sound like “Butt Monkey” to people in Latvia. And you know what? I fully expect that the good people of Latvia or wherever would have a good laugh at our funny sounding names.

“Don’t you think this is culturally insensitive?” Answer: No. Lighten up.

“Man these aren’t even funny you suck.” Answer: Sorry, I’ll try to suck less in the future.

So there you have it—my preemptive response to complaints. Now, lets all have a good laugh at people who’s names have dirty English words in them! 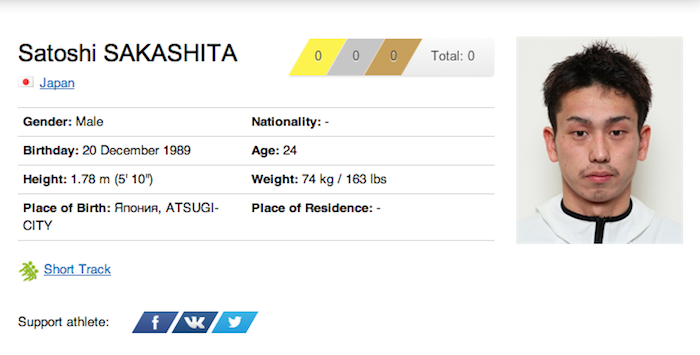 I know for a fact that I came across a Japanese athlete named Sakashita when compiling the list of funny names at the 2012 Summer Olympics. Guess what? Still funny. 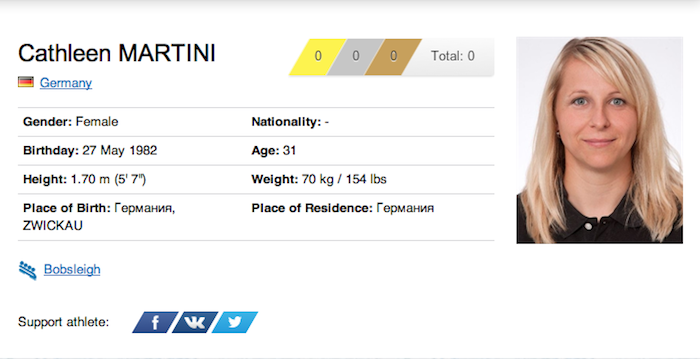 I don't know how they do things in Germany, but in North America her nickname would almost certainly be Cathleenie Martini. 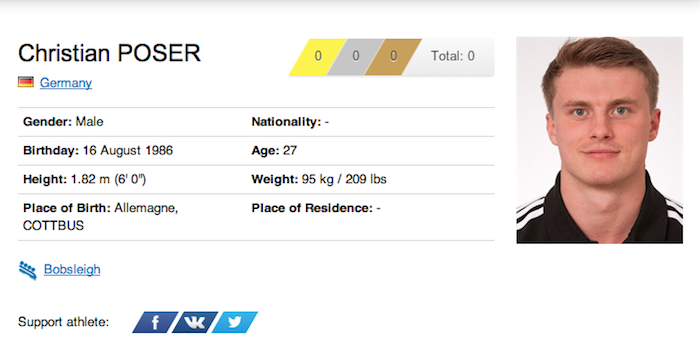 Wouldn't it be funny if he actually was a poser? 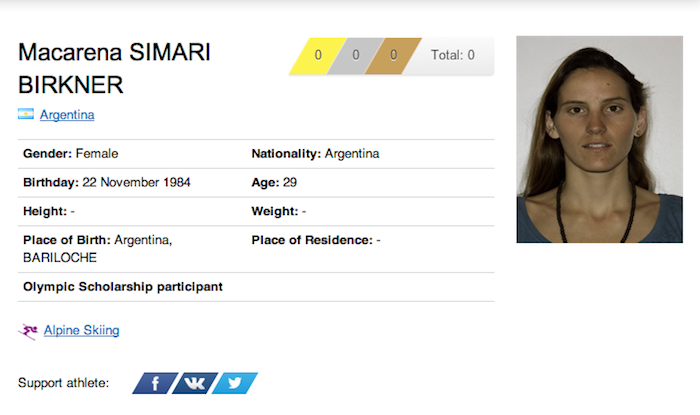 Yes, I realize Macarena is a very common name in Spanish-speaking parts of the world. But you know what? It's also the name of a really terrible song and eponymous dance craze that swept the nation in 1995. That makes it humorous. 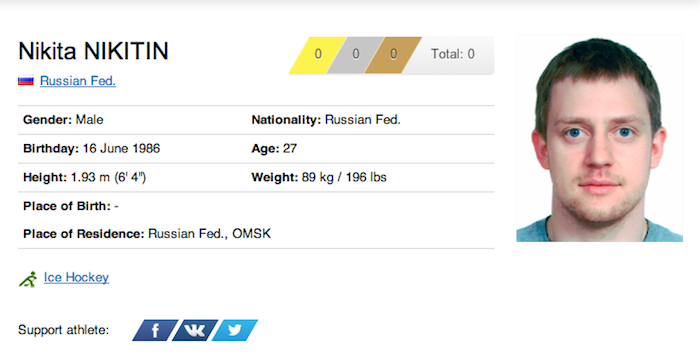 Russians have a very complex patronymic and surname naming customs, so maybe there's a really good explanation for Nikita Nikitin. However, to me, it just sounds like somebody named their kid Richard Richards, or Donald Donaldson.

Um, was there a typo on the birth certificate or something? Are you sure you don't mean Smith?

Doesn't "Apostolos Angelis" sound like a Catholic doctrine or Papal encyclical or something?

See? It's funny because his name is Bong. 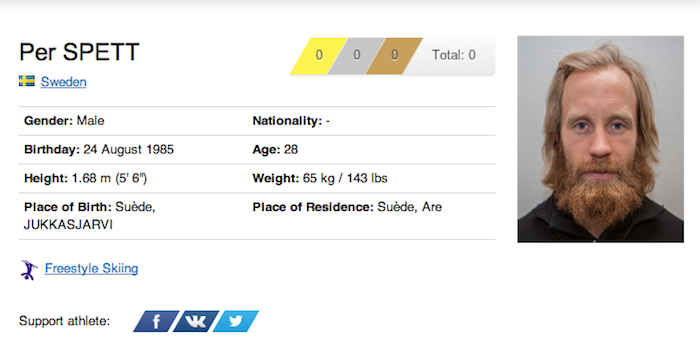 First of all, how awesome- but also slightly scary-looking is this dude? Second, his name is Per Spett, which you can just do so much with. For example, "Son, I think you need some Per Spett-tive," or "I Spett on your face." 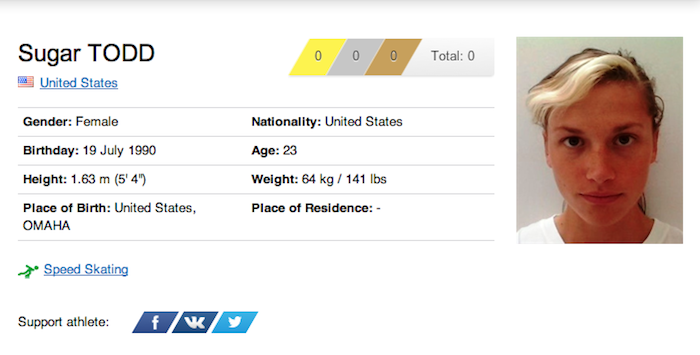 In German, anger means meadow, which is a lovely name. But in English anger means strong feeling of annoyance, displeasure, or hostility, which is not so lovely. 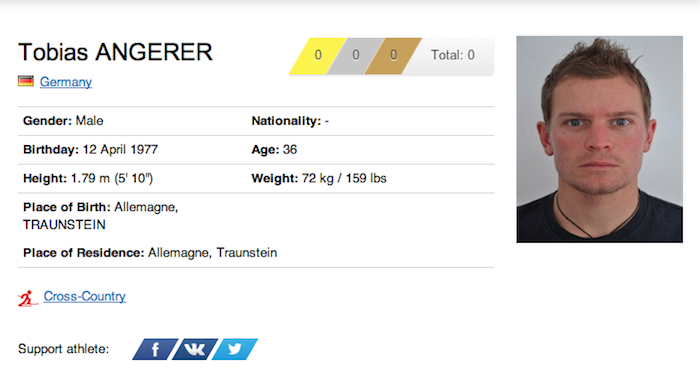 He's not angry himself. He just makes other people angry. 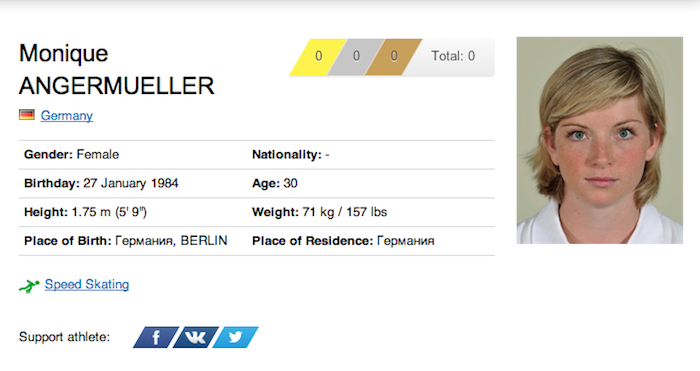 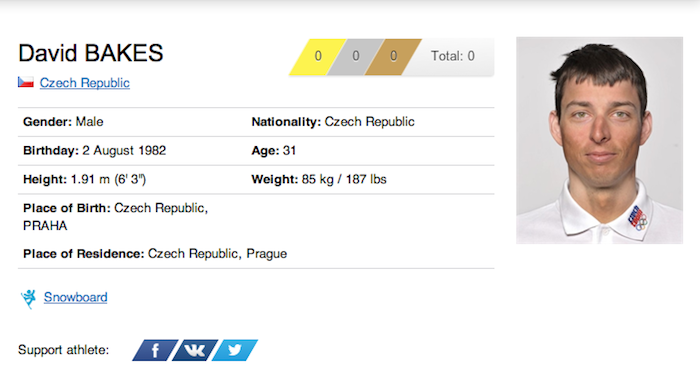 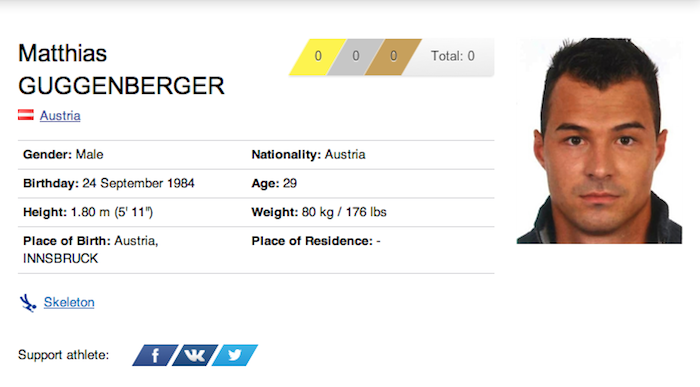 Guggenberger doesn't sound like anything in particular, but it's still something a kid on this side of the Atlantic would get made fun of in the school yard. 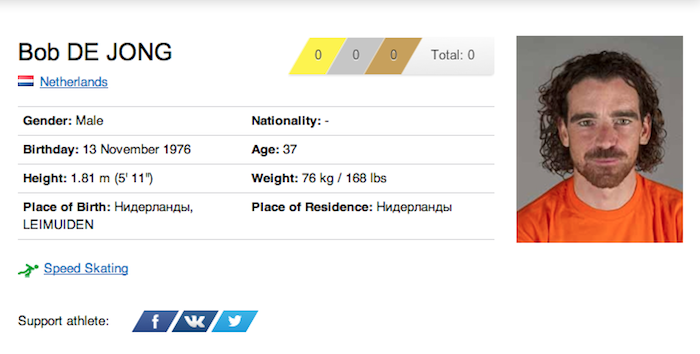 Daan, Ruben, Luuk, Thomas, Lars—those are all names you are used to seeing Dutch men have. But Bob? Bob De Jong? That's odd.

I'd criticize this guy's parents for naming him Robert and then calling him Bobby. But hey, it's their prerogative.

When your last name is Swette, the puns are endless. Swette suit, Swette shirt—they're all good.

Mongolia has some truly epic names. Byambadorj Bold is one of them. I just wish I had the first clue how to pronounce it.

Feuz wouldn't be amusing at all if this guy's name was Richard or Gerhardt, or something like that. But combined with Beat, yes, it's pretty funny.

Man, they use syllables like their going out of style in Lithuania.

Ingermars or Marsdotter wouldn't be such a mouthful. But Ida Ingermarsdotter just has way more syllables than I, for one, am accustomed to. Good luck to all the native English-speaking cross-country commentators out there.

There goes Lithuania again with their crazy names. Fun fact: you can tell Ingrida isn't married because her names ends in =aite. Thanks, Wikipedia!

Really, though, Lithuania has nothing on Iceland when it comes to long and incredibly difficult-to-pronounce surnames. However, this one is phonetic. It literally means "Asgeir's daughter." In Iceland they don't hand surnames down. Instead, they take the dad's name and as -son or -daughter to the end. So obviously Erla's father is named Asgeir. 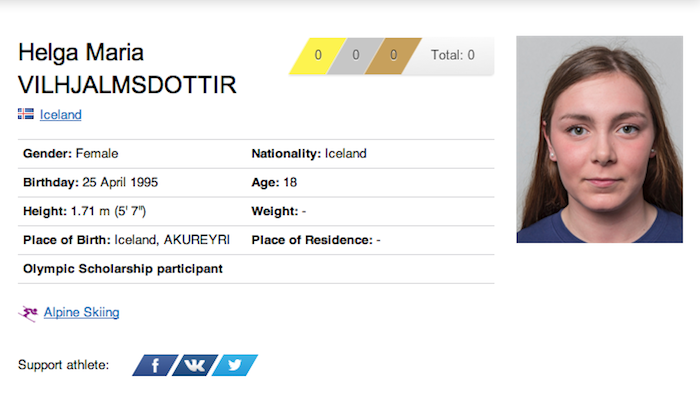 Once you get the hang of it Icelandic names aren't so hard. Vilhjalm comes from Vilhjalmur, which is their version of William. So this is William's Daughter...which really clears things up, cause there's only one William in Iceland, right? In any case, Helba Maria Vilhjalmsdottir is quite a tonge-twitter. 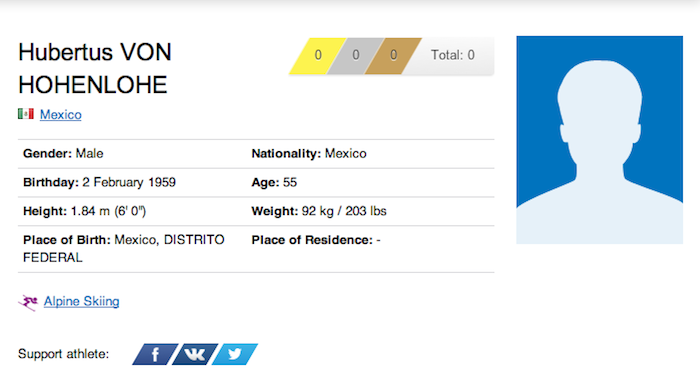 The oldest athlete at the 2014 Winter Olympics has a name that sounds like one I would make up for my cat. Don't feel bad for him, though. He's actually an Austrian prince, and thus very wealthy. 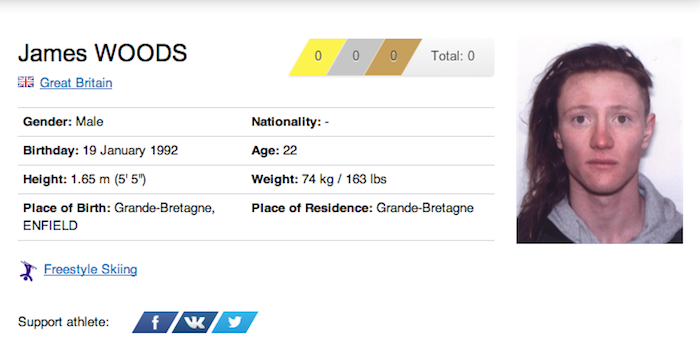 I guess this guy's parents just were not aware that there is a fairly famous actor named James Woods...or they didn't care. 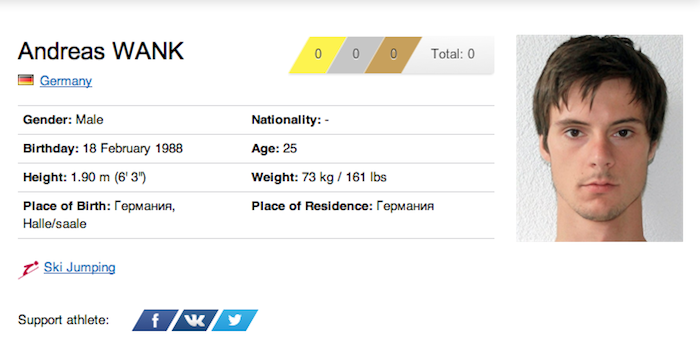 Now that is truly unfortunate. You don't even have to be British to know what "wank" means.

I know it's probably pronounced yer-low-va. But it looks like yer-love-uh. And that makes me laugh. Who, my lova? No, yur lova. 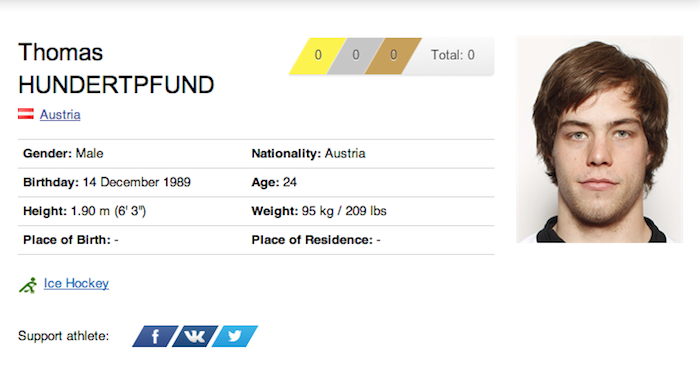 It looks like somebody sneezed while typing this guys name and accidentally added a few extra consonants in there.

Man Mongolian names are amazing. And I thought the English-speaking cross-country TV people were going to have a tough time with Ingermarsdotter.

Now there's a name you don't want to have these days. 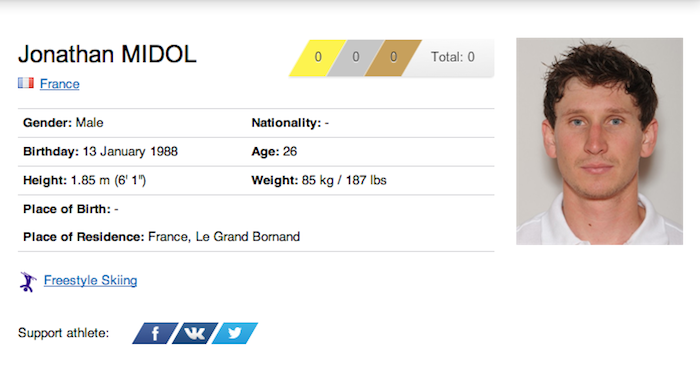 Poor kid. His parents named him after an over-the-counter menstrual cramp medication. 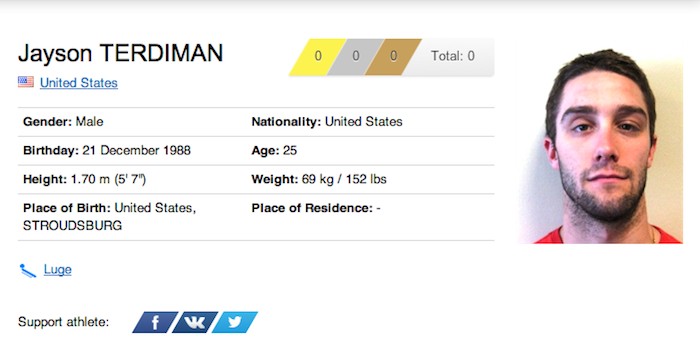 No matter how much Jayson here insisted that his name is pronounced terd-imin (like vitamin with a terd instead of vita), you know everyone called him turdy-man. Or the turd-man. Or turdmeister. 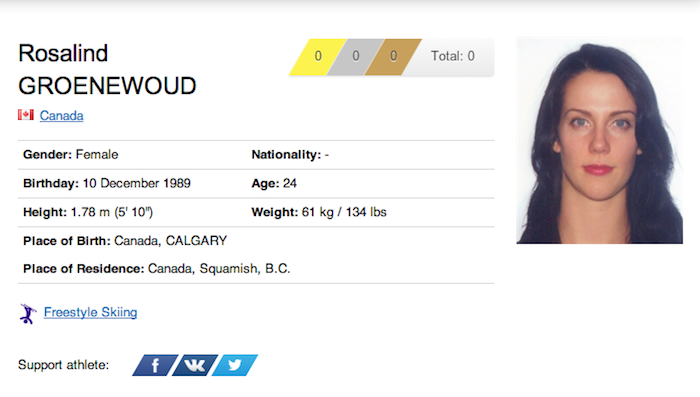 Growin' wood? From the looks of it, yes.

I don't need to explain this one, right? 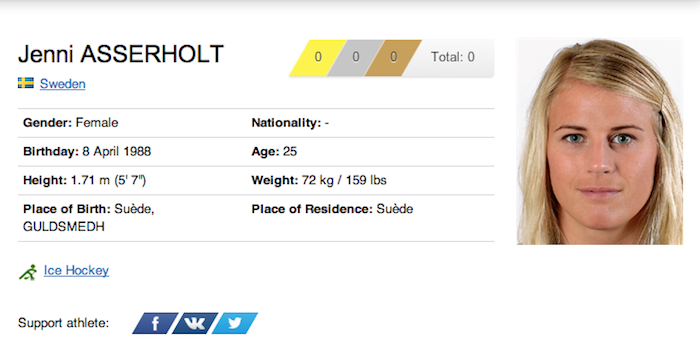 Come on, ass is right there in the name. It's too easy.

Andreas Wank, meet Jakov Fak. I feel like you two will have a lot in common.

I don't know much about her, but Seraina Boner certainly looks like a fine, upstanding citizen. (Hey, always end on a good erection joke.)