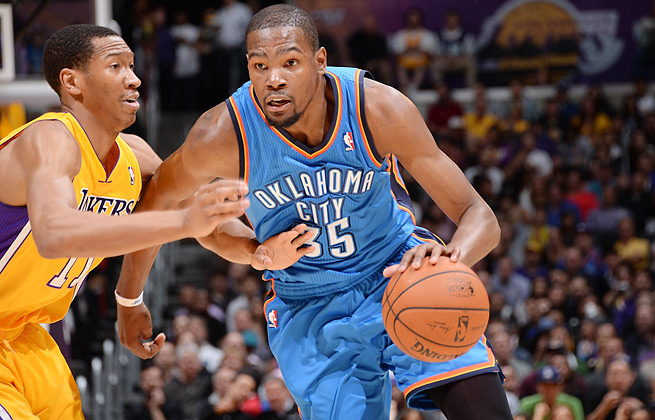 The Oklahoma City Thunder received a scare from the Los Angeles Lakers last night in their final game before the NBA All-Star Break.  But in the end, Kevin Durant was there to make sure that’s all it was: a scare.

For the second time in his past three games and the seventh time in the new year, Durant surpassed the 40-point mark, scoring a game-high 43 points to go along with 12 rebounds, seven assists, and three steals.  And the Thunder would need every one of those points, as they narrowly escaped with the 107-103 victory, handing the Lakers a franchise-record seventh straight home loss.

With the win, the Thunder enter the All-Star Break sitting in first place in the entire NBA.  As for Durant, he is now averaging 31.5 points per game on the season and his performance last night earns him “The Stat Line of the Night” for Thursday, February 13, 2014.