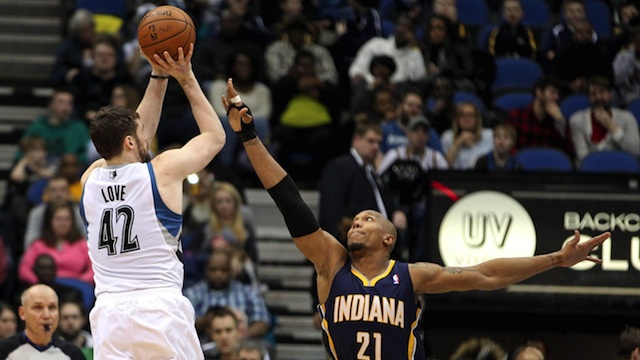 Rumors of Kevin Love‘s “inevitable” move to the Los Angeles Lakers continue to swirl around the NBA rumor mill.  But until that move happens, he still a part of the Minnesota Timberwolves, and last night the all-star forward was helping them earn a victory against the Indiana Pacers.

Love torched the NBA’s best defensive team to the tune of 42 points, while adding 16 rebounds, one assist, and one steal during the T-Wolves’ 104-91 victory.

Despite the victory, it appears as though Love will be watching the playoff from his couch for yet another season.  That would make it six seasons without a post-season appearance for Love, but if he’s looking for something to cheer him up, he has “The Stat Line of the Night” for Wednesday, February 19, 2014.