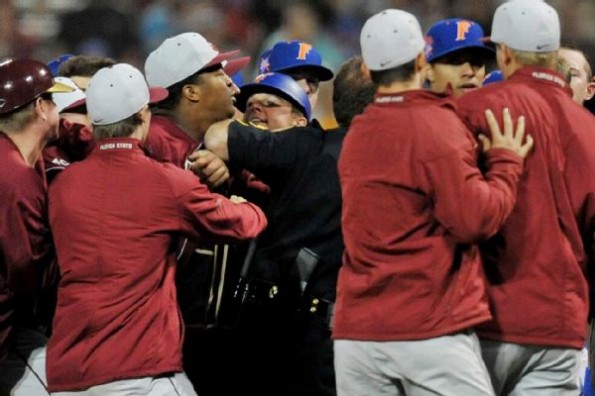 A brawl that gets everybody off the bench and into the fight in an NCAA baseball game is fairly notable on its own, but when it’s between the Florida Gators and the Florida State Seminoles, and when Heisman Trophy winner (and FSU relief pitcher) Jameis Winston is involved, it becomes even more interesting.

Be that as it may, this is a pretty typical fight as far as bench-clearing fracases go, and it’s kind of difficult to pick out Jameis Winston from the bunch, so you just have to take our word for it that he was there.

It all started after DJ Stewart of Florida State collided with Gators pitcher Danny Young, and Florida’s first baseman Zack Powers came to his defense.

Things escalated from there, but thankfully it never went too far beyond heated pushing and shoving—albeit, everybody did get involved from both teams, with the umpires and police eventually being brought in to restore order.  In the end, Stewart, Young, and Powers were all ejected from the game, which the Gators won by a score of 4-1.

You can see the whole thing in the video below: