>Total Pro Sports
MLB
An Adult Tried to Snatch a Ball Intended for Kid, But Derek Jeter Wasn’t Having that S%!# (Video)

An Adult Tried to Snatch a Ball Intended for Kid, But Derek Jeter Wasn’t Having that S%!# (Video) 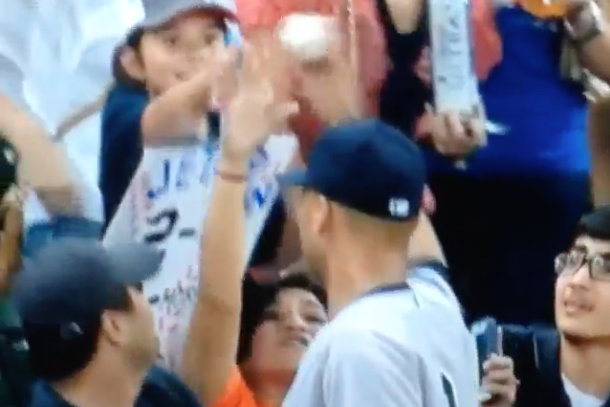 For my money, one of the most peculiar phenomena in all of sports is the way a foul ball at a baseball game can transform otherwise rational and decent members of society into obsessed, child-stomping maniacs. And so far this season, though it’s less than a week old, we’ve already seen two notable cases of this phenomenon.

Take a look at what happened last night in Houston, for example. Derek Jeter spotted a cute kid in the stands wearing a Jeter t-shirt holding up a Jeter sign. So obviously he wanted to get that kid a ball, and he indicated as much to the pack of idiots hanging over the railing. However, that still didn’t stop the ball-hungry beggars from nearly snatching the thing right out of Jeter’s hand as he was handing it to the little girl.

The other example from opening week? Well, in Chicago, a White Sox fan literally leapt over several rows of seats just to beat a little girl to an Adam Dunn home run ball—nearly crushing her in the process.