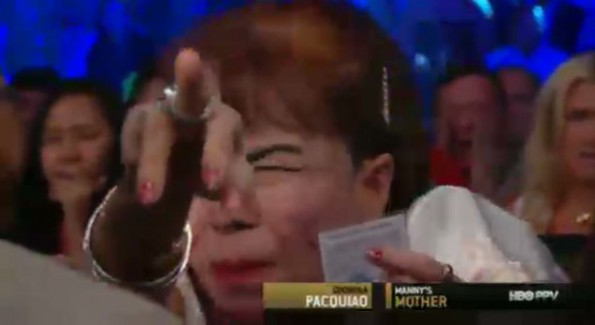 Saturday night in Las Vegas, Manny Pacquiao won back the WBO welterweight championship from Timothy Bradley, but he didn’t do it alone.  He had the help of his mom, who was performing some kind of gesture-based voodoo hex from her seat.

At least, that’s what it looked like, as Dionesia Dapidran-Pacquiao was captured on camera covering her face, brandishing a crucifix, and making weird pointing gestures toward the ring. I don’t know exactly what she was doing, but I do know that I’m glad she wasn’t doing it to me.  In my opinion, she’s much more frightening than Pacman.

Whether Manny Pacquiao’s mom was placing a hex on Timothy Bradley or just getting really excited about the fight, it’s pretty entertaining to watch. And you can do just that by checking out the video below.  I expect that in a few days’ time, Manny Pacquiao’s mom will be an internet superstar.