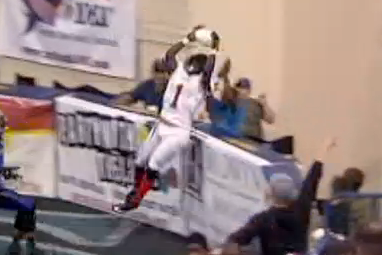 Over at the Professional Indoor Football League, Georgia Fire wide receiver Johnny Lester went head-over-heels over a wall for an incredible touchdown catch. Such a thing is evidently possible in the PIFL, but rare enough to get a pretty strong reaction from the fans.

It was also spectacular enough to catch the attention of ESPN, which (according to the title of the YouTube video), featured it as a “Top Ten Play.” Lester was able to keep both his feet in bounds even while back flipping over the fence as he caught the ball, and the ref actually hops up onto the fence in order to call the play—leading us to believe that both of these guys probably deserve jobs in the NFL.

You can watch George Fire wide receiver Johnny Lester make his insane over-the-fence touchdown catch in the video below. And maybe you should finally start watching indoor football after all.

And here’s a much better view of the catch in animated GIF form: