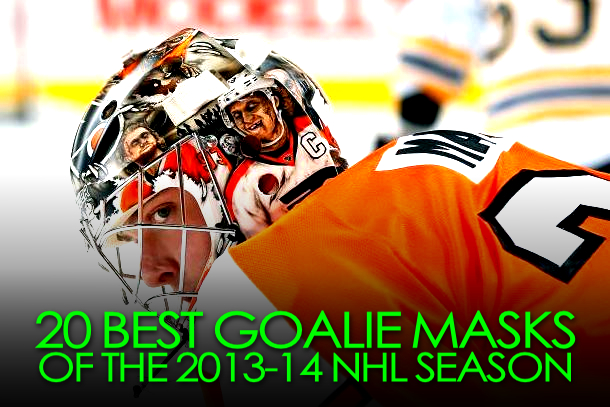 The 2013-14 NHL regular season is now in the books. That means 14 teams are making tee times while the other 16 get ready to contend for the Cup. However, before the real season begins, we’re going to take a few minutes to pay tribute to the most unique uniform element in all of pro sports: the goalie mask.

This was a particularly good year for goalie masks in the NHL. In addition to the annual “Winter Classic,” there were also the four “Stadium Series” games in L.A., New York, and Chicago, plus the “Heritage Classic” in Vancouver. That meant there were nine special edition uniforms worn this season, which provided the league’s goalies 18 more opportunities to come up with creative designs.

So which ones were the best? Well, we put together a top 20 for you. Take a look and tell us what you think. 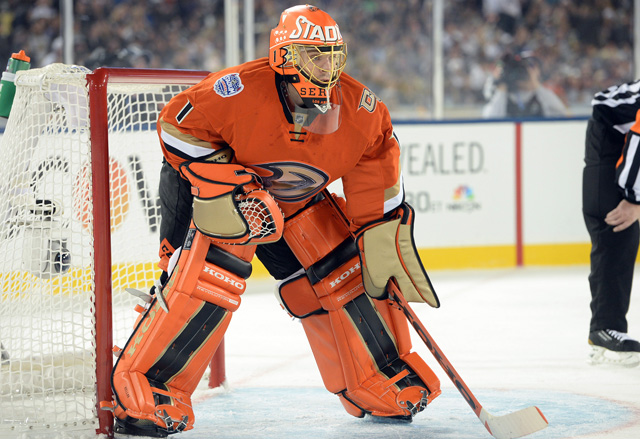 First up, we have Jonas Hiller's Stadium Series mask. The NHL certainly had to love the fact that he put "STADIUM SERIES" across the front, which was good for branding. We love the matte finish, the golden D webbing on the side, and, of course, the fact that it looks like a Wheaties Box. (Wheaties: The Breakfast of Champions™.) 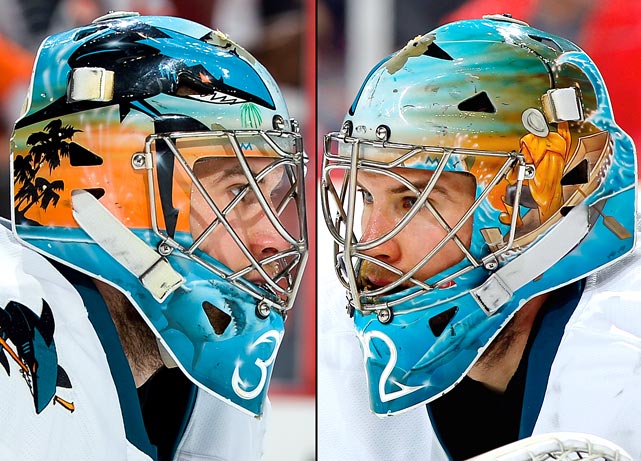 Great Sharks logo on the top. Excellent beach sunset and underwater scene down below. It almost makes you forget the fact that the city of San Jose is, for all intents and purposes, landlocked. 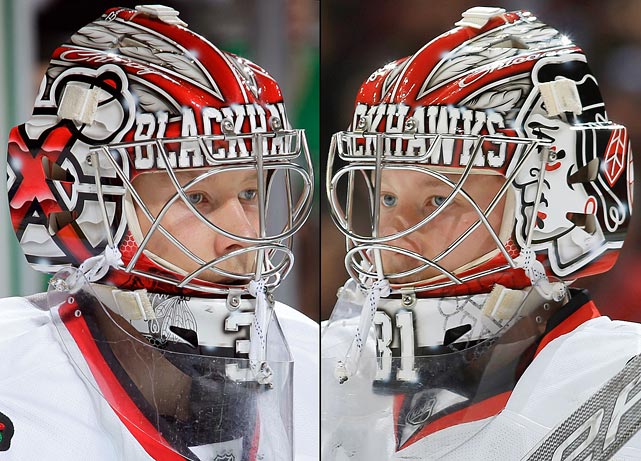 What makes Antti Raanta's mask standout is the simple color blocking and the oversized primary and secondary Blackhawks logos on the sides. Those make the mask look fantastic from far away. Then, when you get a closer look, you notice the nice details—like the feathers on the top, and the watermark logos down by the chin. 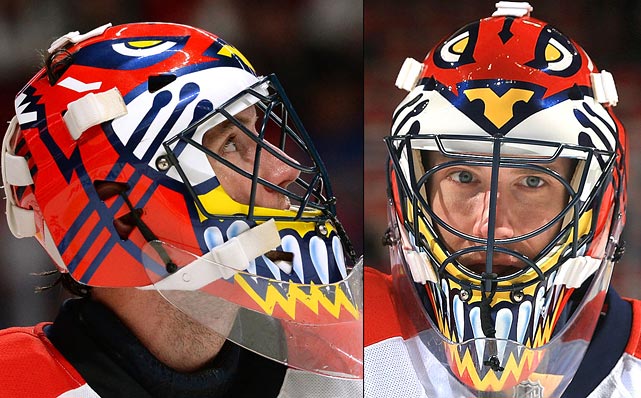 At No. 17 we have another helmet that keeps the design simple so as to look awesome from far away—i.e., television. Way to go, Scott Clemenson. 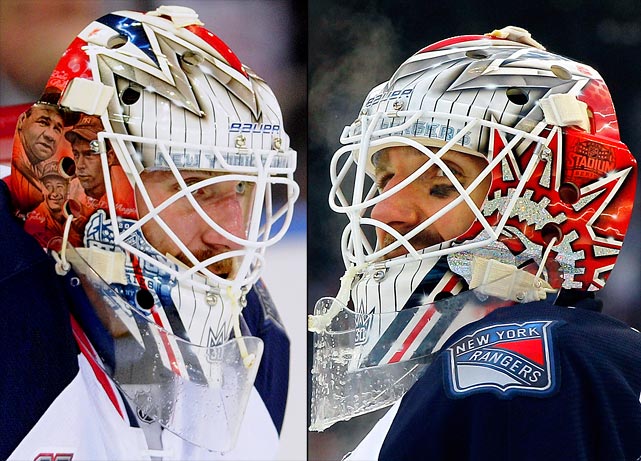 Meanwhile, at No. 16 we have the opposite. King Henrik's Stadium Series mask doesn't look particularly awesome from far away because it's too busy. However, up close you see some pretty great details honoring the fact that the Rangers were playing in the home of the Yankees, such as the portraits of Yankees greats on the left and the iconic pinstripes. 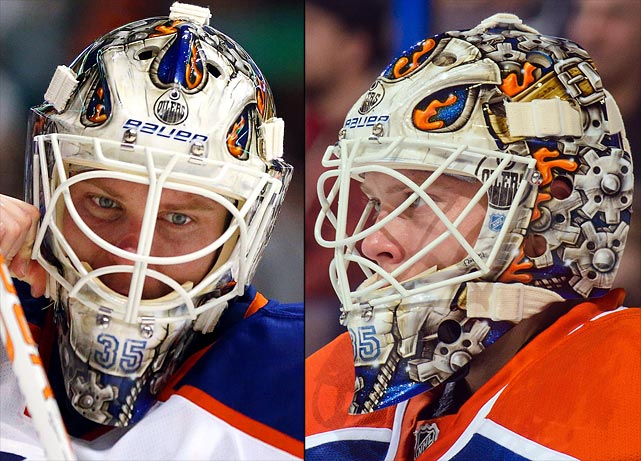 Not really sure what's going on here. Is Viktor Fasth all gooey machinery behind the goalie mask or something? Like he's part man, part machine? Whatever it is, we like it. 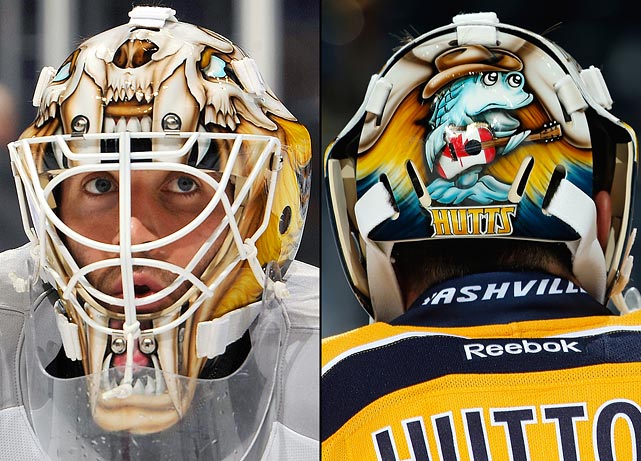 The guitar-playing fish on the back is a little goofy, but the front of this mask is terrifying and perfect for a team whose logo is inspired by sabre-toothed tigers. 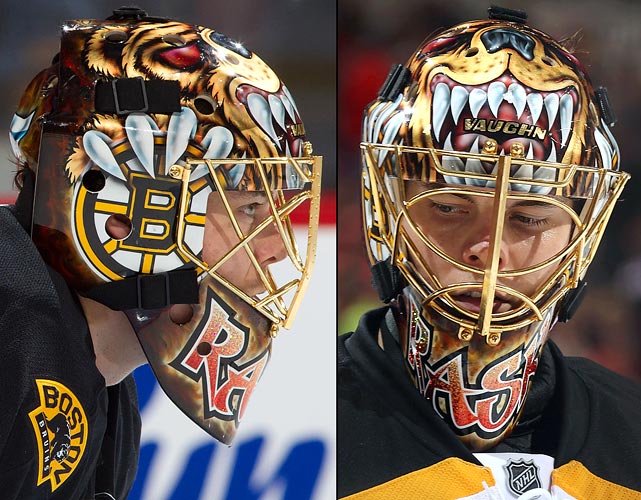 Scary bear with red devil eyes? Check. Last name in graffiti script? Check. If the Bruins go all the way (again) this year, Rask will do it in style. 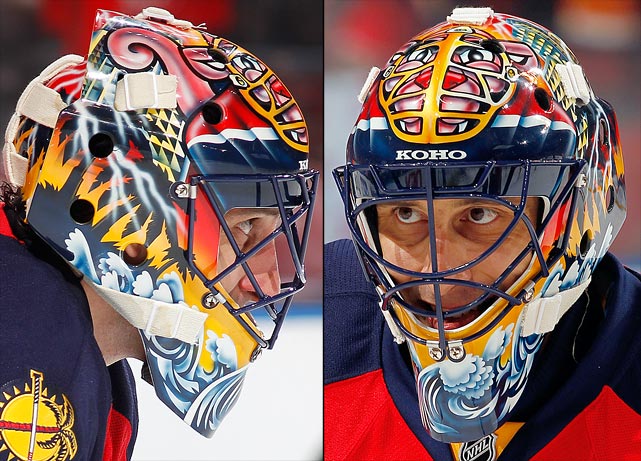 We can't decide whether we love or hate the Pink Panther on the top, but the Miami beach-inspired scene on the sides and bottom are excellent. Bobby Lou's masks were never this good in Vancouver; you can tell he was happy to get off that train wreck and get back to the Sunshine State. 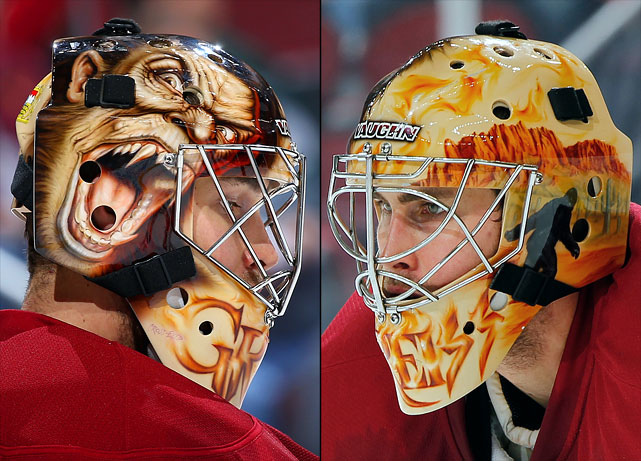 Apparently Thomas Greiss has some sort of fascination with Bigfoot, and the result is a brilliant and terrifying mask. That being said, somebody really should tell the 'Yotes netminder that the mythical creature is said to live in the Pacific Northwest, not the Arizona dessert. 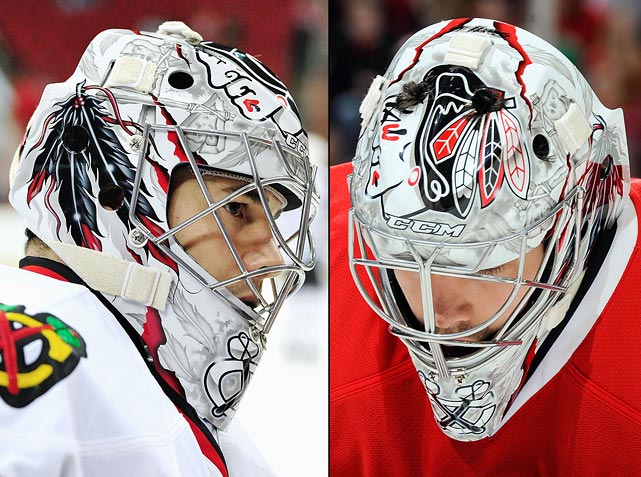 Hats off to Stephane Bergeron of Griffe Airbrush in Quebec. He did Crawford's mask and, from the looks of it, Antti Ranta's mask. It's one of the best motifs in the NHL today. 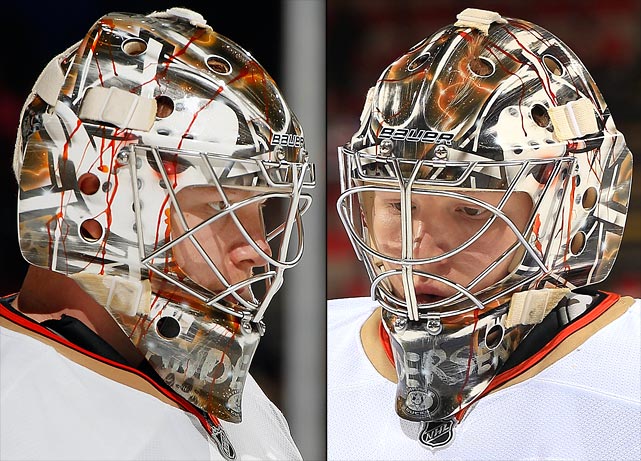 Frederik Andersen may be Jonas Hiller's backup in Anaheim, but he's got a starter-calibre mask. Up close you can clearly see the watermark graphics, but from far away this thing just looks like pure college football-inspired chrome, which is pretty badass. 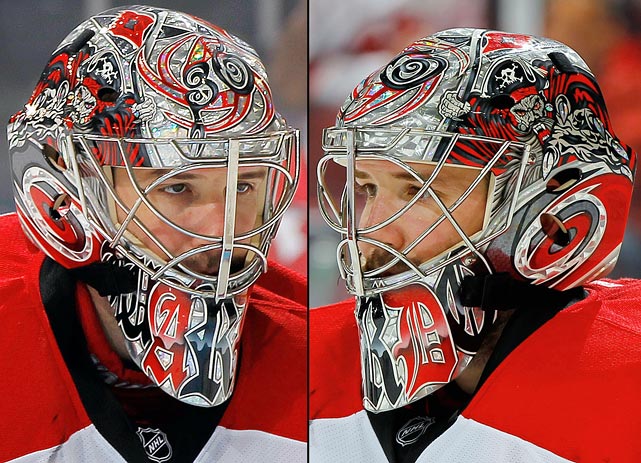 Cam Ward's helmet poses a great question: why don't the Hurricanes change their name to the Pirates? That would be much better. 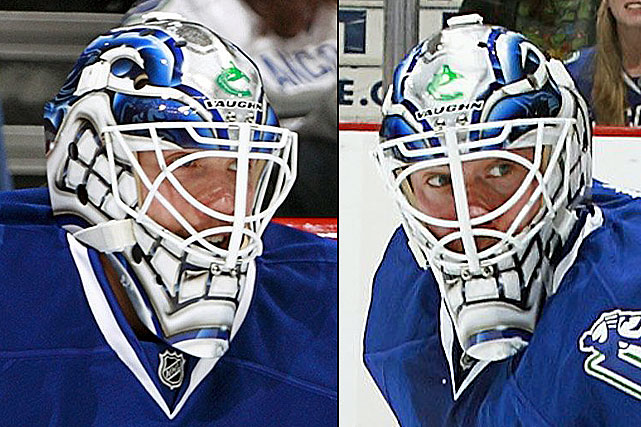 We still hate the orca "C" logo—partly because the team is called the Canucks, not the orcas, and partly just because it sucks—but Jacob Markstrom's killer whale mask is pretty awesome. 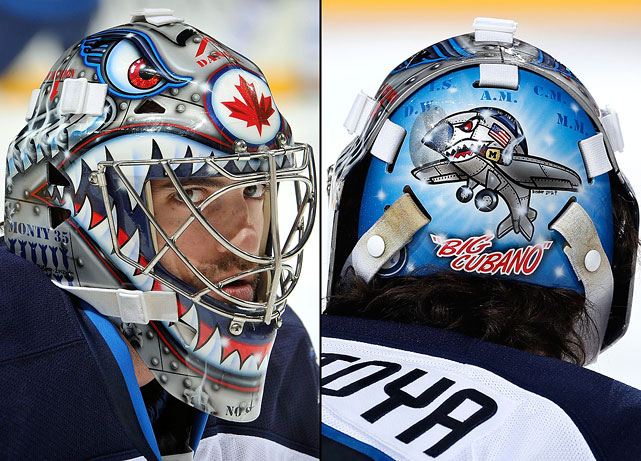 What is there to say about Al Montaya's mask? It's just fantastic. 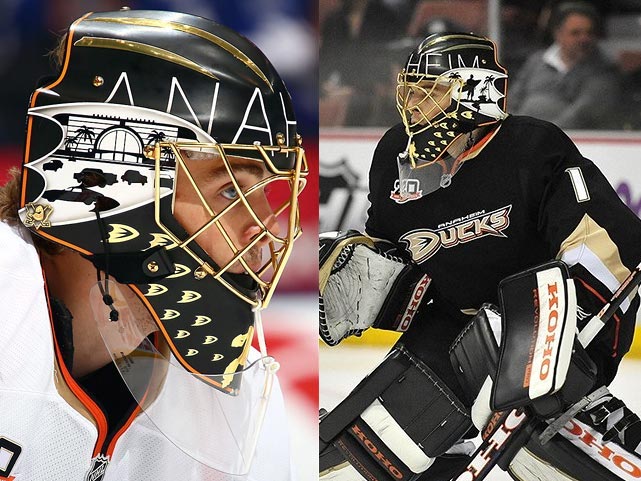 Speaking of goalie masks inspired by college football helmets, Jonas Hiller has been rocking the matte & chrome look for several years now, looking awesome the entire time. However, this year's edition—with the black and white images on the side, the gold chrome Ds, and the lettering across the top—is his best yet. 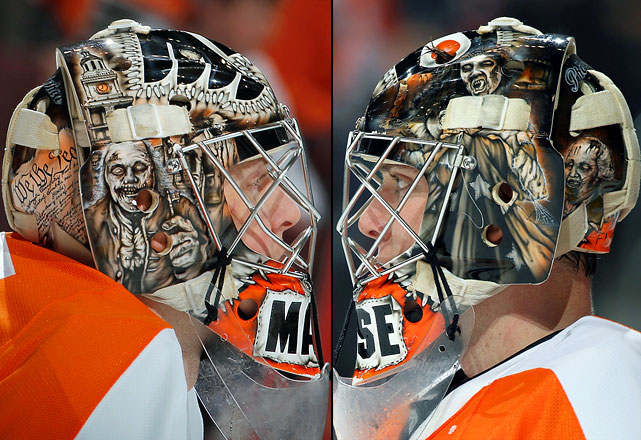 Philadelphia Flyers netminder Steve Mason has a thing for zombies. Thus, back in September, he started the season wearing this sweet mask which, with its zombified Founding Fathers, is a bizarre tribute to the history of Philadelphia. However, the mask Mason introduced in January tops this one... 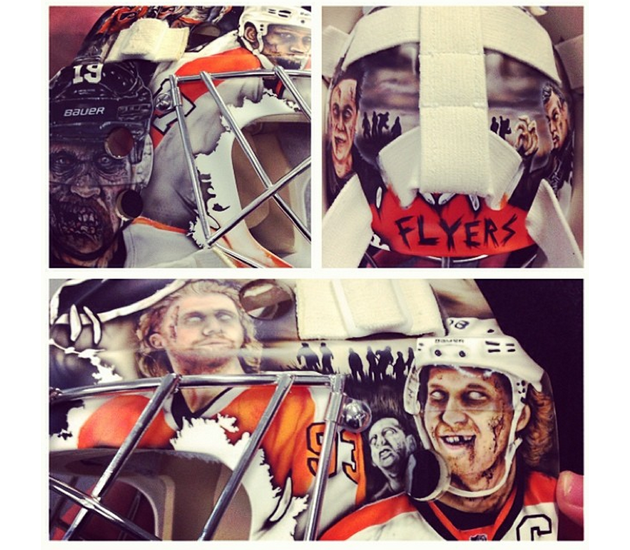 Marc-Andre Fleury's regular mask just missed the cut for this list. However, his stadium series mask, worn for the Penguins' game against the Blackhawks at Soldier Field, is probably going to go down as an all-time great. 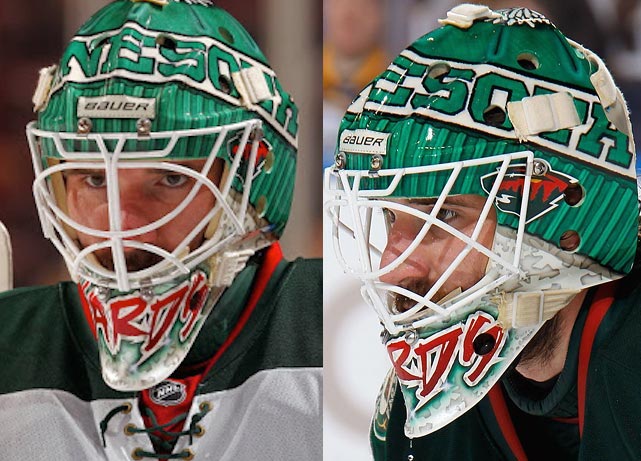 Speaking of all-time great masks, how about this one from Josh Harding? The goalies who got to play outdoor games this year may have worn touques on top of their masks, but only Harding had his touque painted on. Pure genius, isn't it?