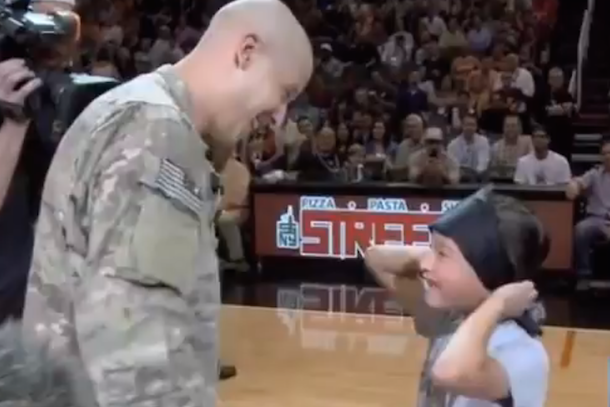 You know who loves a good surprise military homecoming? Everybody. That’s why professional sports teams help arrange them so often. If a team’s only goal was to do something nice for a military family that makes a sacrifice for their country, they would just arrange the reunions at home, or maybe at the airport. But they don’t. They make sure the reunions are at the stadium so the fans in attendance have warm fuzzy feelings and enjoy themselves at the game…and then, at a later date, remember how much they enjoyed themselves and fork over more money to attend another game.

Am I cynical? Maybe a little. But I’m not that cynical. I’m sure the people running the teams also genuinely enjoy making people happy. So I wouldn’t call these surprise military homecomings PR stunts. I’d call them win-win situations.

The latest win-win situation? That happened last night in Phoenix, courtesy of the Suns. During halftime of their game against the Grizzlies, they blindfolded a little boy named Logan Bledsoe for what was supposed to be some kind of halftime contest. Then they brought him out to center court where he was met by his dad, Specialist Jamie Bledsoe of the California National Guard.

Given that dad had been in Afghanistan for the last nine months, tears were shed. Then everyone went home happy.