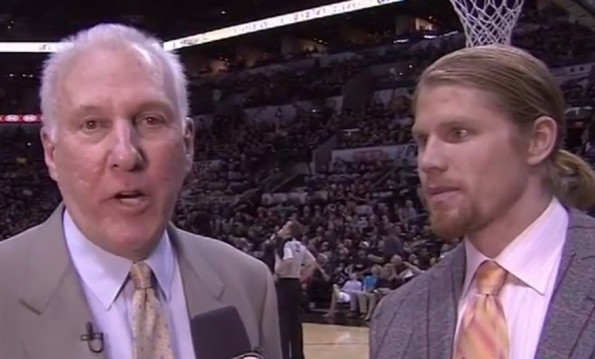 Legendary sideline reporter Craig Sager is scheduled to miss several weeks of his regular gig covering the NBA Playoffs on TNT this year, in order to receive treatment for acute myeloid leukemia. So to fill in, TNT went with an unusual (yet completely appropriate) choice: Craig Sager Jr.

The highlight of Craig Jr.’s first night on the job at a Playoff game between the San Antonio Spurs and the Dallas Mavericks was definitely his interview with Spurs coach Gregg Popovich, who has had a few memorable interviews with Sager over the years. The subject inevitably turned to the absent Sager, with Popovich delivering an emotional message to the cancer-battling reporter:

“We miss you. You’ve been an important part of all of this for a long time doing a great job. We want your fanny back on the court and I promise I’ll be nice. Get back here. Good luck.”

Viewers might notice that Craig Sager Jr.’s sartorial sense isn’t as flashy as that of his famous dad’s, which was explained by the younger Sager’s tweet after the game:

Just a section of the closet. The coat I wore was bc it was the only one with the tag on so I knew he hadn't worn it pic.twitter.com/kegVyergBm

Craig Jr. tweeted a funny story about his interview with Popovich, too:

Arrived this morning to do a taped interview with Pop. He goes no, we're doing this live 3rd qtr just like your Dad. pic.twitter.com/RPAwIt7tvR

You can see video of Craig Sager Jr.’s interview with Spurs coach Gregg Popovich below. And Craig Sager is expected to be back to cover the NBA Playoffs next year.

Get well soon, Craig! We’re all rooting for you!