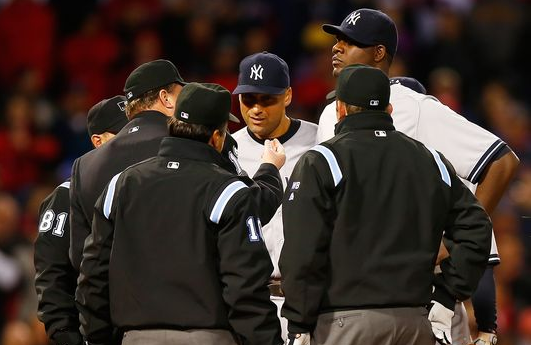 Michael Pineda was kindly asked to leave in the second inning of Wednesday’s Yanks-Sox game after he tested positive for a performance-enhancing sludge. The strange substance turned out to be, after further investigation by the umpire, pine tar.

In a strikingly unsubtle move, Pineda’s source of pine tar wasn’t some well-concealed pouch, but rather, his neck. Gross.

Sox manager John Farrell, feeling something afoul, asked the ump to give Pineda a once-over, at which point the substance was found on his neck, but only after the home plate ump hilariously wiped his finger on Pineda’s neck, as though he was checking a piece of furniture for dust.

This isn’t an isolated incident. Last time he faced the Sox, Pineda appeared to have pine tar on his hand, to which he explained his hands “get sweaty.” Sorry, Michael, but that’s doesn’t make putting gunk on your hands or the ball any less illegal.

Of course, while the evidence is damning, it could just be that Pineda has good intentions, but is just a really, really dirty person.

Either way, he’s facing a ten-game suspension should the evidence hold up.

Here’s a look at the video: