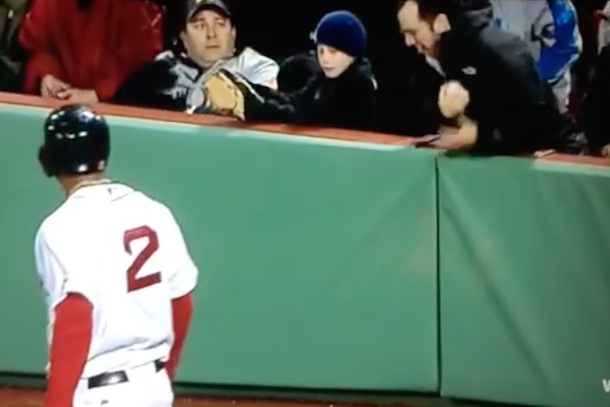 Seriously, adults, you’ve got to knock this shit off. No more snatching souvenirs away from little kids at sporting events.

In the last month we saw two terrible examples of adults trying to take foul balls from children at baseball games, and just yesterday we saw a grown man yank a souvenir hockey stick right out of a little Montreal boy’s hands before those around the bastard shamed him into giving it back.

So what do we have today? We have Red Sox shortstop Xander Bogaerts tossing a ball to a Yankees kid in the front row last night, and a fully grown adult male swooping in at the last second and snatching it up.

Now, I know what you are saying. “Whaaa? A Boston sports fan being a total d-bag? I can’t believe it!”

But believe it. Take a look:

Hopefully this guy came to his senses and gave this kid the ball afterward. And if not, hopefully the kid’s dad stood up and introduced his fist to that guy’s nose.