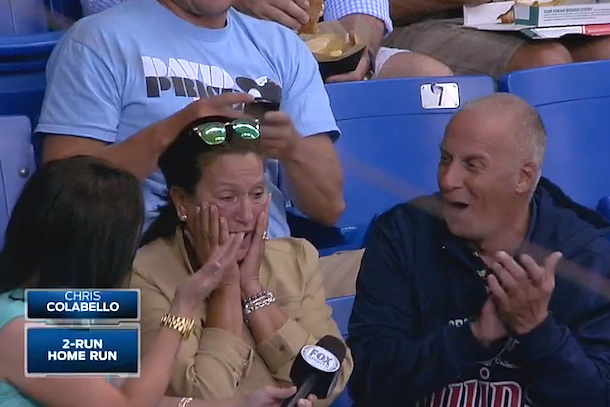 When it comes to your mom’s birthday, it’s generally best to go with something classic like flowers or jewelry, or maybe something sentimental like a picture frame with a picture of you or your kids in it. Stuff like that.

However, if you are a Major League Baseball player, you could hit her a home run while she’s doing a live interview with the sideline reporter. She’d probably like that. Chris Colabello‘s mom did.

Last night in Tampa, Marney Gellner of Fox Sports North sat down for an interview with Colabello’s mom and dad as their son stepped to the plate in the top of the fourth inning. And immediately after Gellner speculated as to whether Colabello would give his mom a nice present, on cue, the guy drove a ball over the center field fence for a two-run homer.

You can’t draw it up better than that. Take a look:

Silvana’s reaction wasn’t quite as uproarious as the one Yannick Noah gave us last month, but it was touching nonetheless.

And incidentally, Colabello wasn’t done showing off for his mom. The game ended up going to extra innings, and guess who drove in the winning runs with a single up the middle in the top of the 12th? That’s right. Chris Colabello.

Not bad for a guy who was playing double-A ball just two years ago at the age of 28.

But hey, I’m sure your mom will love that necklace you got her at Kohl’s.