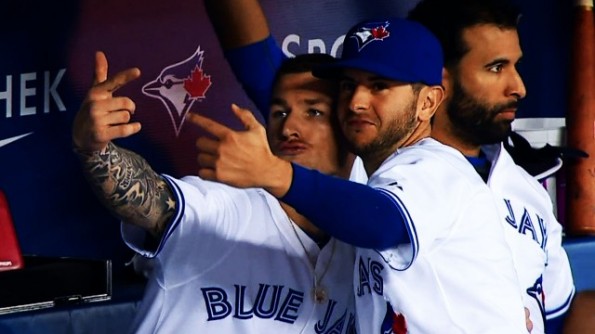 The Toronto Blue Jays’ Brett Lawrie was in top form during Wednesday’s game against the Baltimore Orioles.  And I’m not talking about game performance (although he did pretty well on that front too, hitting his third homer in as many games).  I’m talking about his dugout celebrations.

Over the course of the game, Lawrie added two new pieces to his repertoire, one of them utilizing his infamously terrible mustache, while the other one was a little more of a calculated risk—pretending to take a selfie with teammate Jonathan Diaz might seem cool now, but it’s possible it will become dated in the future (especially with the duckface touch).

You can decide for yourself by checking out the GIFs of Brett Lawrie’s dugout shenanigans below. Invisible selfies and creepy mustache smiles…what could he possibly follow these up with?

Here’s the fake selfie, which almost seems too coordinated to be spontaneous. Maybe they rehearsed it?

And here is the more haunting of the two. I call it the Mustache Grin:

Hat Tip  to @steven_lebron and TBL for the GIFs.