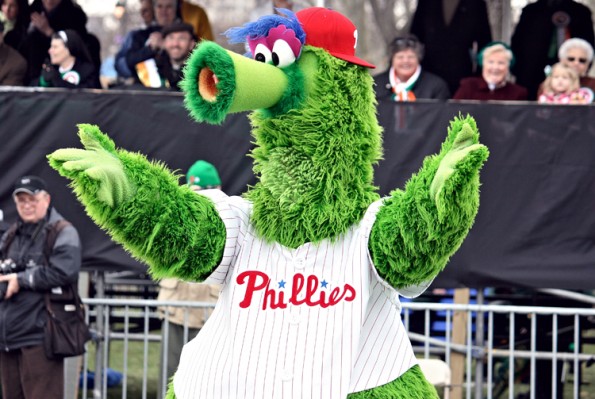 It was on this day in 1978 that the Phillie Phanatic made his first ever appearance as the official mascot of the Philadelphia Phillies.

The idea for the Phillie Phanatic was created by Dennis Lehman in 1977, as he felt the team needed to abandon “Philadelphia Phil” and “Philadelphia Phillis”, and replace them with a more enthusiastic, edgy mascot.  With the help of Harrison/Erickson of New York City, Lehman came up with the giant, fury, green anteater.  The Phanatic made his debut at Veterans Stadium on April 25th during a game against the Chicago Cubs, and he was formally introduced to the public by Tim McCarver during an appearance on the children’s show, “Captain Noah and his Magical Ark.”

The Phanatic has remained a staple at Phillies games, as he can always be found on the field fooling around with members of the opposition, or in the stands interacting with the fans in Philadelphia.  It is because of his antics that he was named the best mascot in sports by Forbes Magazine and Sports Illustrated for Kids.

Here is a montage of the Phillie Phanatic.