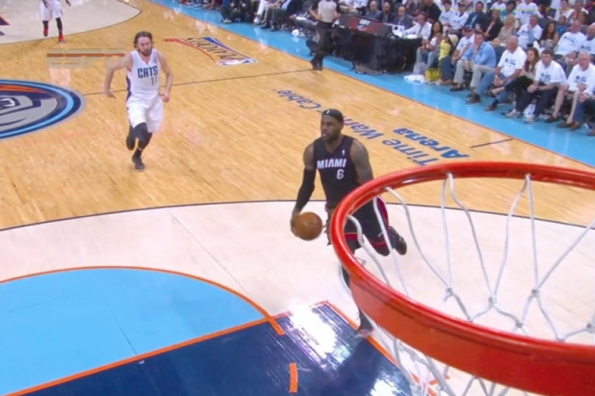 As one of the most famous NBA players over the course of the past decade, LeBron James has been compared to Michael Jordan by many for a while now. So it made sense that a lot of people interpreted LeBron as staring down Jordan during Game 3 of the NBA Playoffs series between the Miami Heat and the MJ-owned Charlotte Bobcats on Saturday.

It happened just before a monster dunk from LeBron, which added to the drama of the situation. But according to LeBron, his eyes were never on Michael Jordan.  Here he is in an interview with the Charlotte Observer:

“No, no. Don’t start that. Absolutely not, man. Absolutely not. I was able to read (Josh) McRoberts, get a steal and push the lead back up. I absolutely didn’t look at MJ, for sure.”

If LeBron really was staring down Michael Jordan, it would sort of defeat the purpose if he denied it afterwards, wouldn’t it?

Nevertheless, you can expect this moment to cohere into legend sooner rather than later. Until that happens, you can decide for yourself what happened by checking out the whole thing in the video below. For added effect, find some of that Curb Your Enthusiasm “stare-down” music to play as accompaniment.