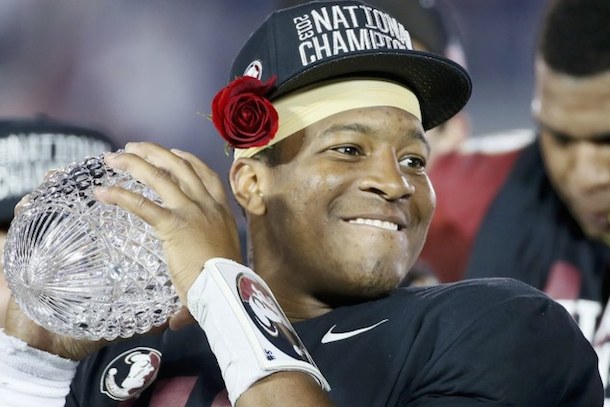 Yes, you read that headline correctly. Jameis Winston, the guy who won the Heisman Trophy last year before leading the Florida State Seminoles football team to the BCS National Championship, the guy who is going to be the #1 pick in the 2015 NFL Draft, was issued a citation on Tuesday for shoplifting crab legs at a Publix grocery store in Tallahassee.

SB Nation blog Tomahawk Nation broke the story. A “trusted source” inside the Tallahassee PD said Winston got what’s being called an adult citation. “If he completes the sanctions it will never show up on his record.” that source explained. “They commonly give them to juveniles on first criminal offenses. They are now doing it for minor misdemeanors for adults to lower crime rate.”

The penalty for this particular citation? A huge $30 fine and some community service.

The penalty from the FSU Athletic Department? Suspension from the baseball team until Winston completes the community service.

Of course, this is not the first time Winston has been accused of doing something illegal. He’s also been accused of stealing soda from a Burger King…and of raping somebody. But of course, official rape charges were never filed.

So I guess after that, Winston feels like he can just walk into the grocery store and help himself to all the free seafood he wants.