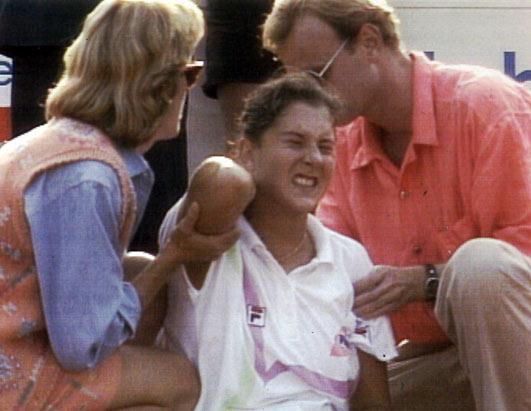 It was on this day in 1993 that Monica Seles was stabbed in the back by an obsessed fan during her quarterfinal match against Magdalena Maleeva.  The incident occurred in Hamburg, Germany at the Citizen Cup tournament.

Monica Seles entered the 1993 season as the world’s top ranked female player.  She was the three-time reigning French Open champion, as well as the two-time reigning Australian and U.S. Open champion.  It was an obsessed fan of Steffi Graf’s, Seles’ biggest rival, who carried out the attack in an attempt to help Graf regain her #1 status.  Gunter Parche stormed the court during a break and would stab Monica in the back between the shoulder blades to a depth of 1.5 centimeters.

Although her injury took only a few weeks to heal, Seles would not return to competitive tennis for over two years.  Considering the traumatic experience she went through, it was not a surprise to see Monica take a long hiatus from the game she loved to play.

Here is the aftermath of the Monica Seles stabbing incident.