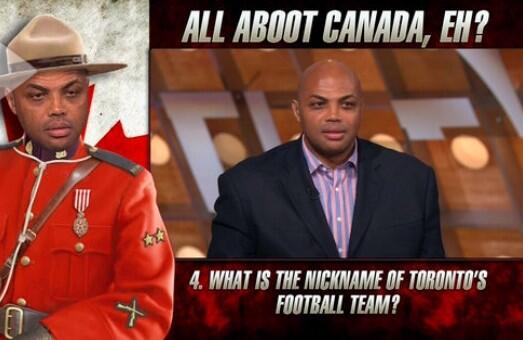 Further evidence that Inside the NBA on TNT is secretly the funniest show on television: On a recent episode, Charles Barkley was charged with proving his documented love for Canadian sports by taking a quiz on basic Canadian facts. Spoiler alert: He failed.

Among the Canadian facts that Chuckster failed to answer correctly include what a Loonie is (not a cake) and what Canadian hockey players call their jerseys (not jerseys). He did know the name of Toronto’s football team, but he choked in the final (and toughest) question of the quiz—correctly pronounce Jonas Valanciunas’s name.

To the surprise of no one, Barkley pronounced “Valanciunas” in a way that only he could, rather than the way that it’s supposed to be pronounced. And as a kicker, he incorrectly identified a movie quote from Pulp Fiction as being from Fast Times at Ridgemont High, but nobody else on set managed to call him out on that one.