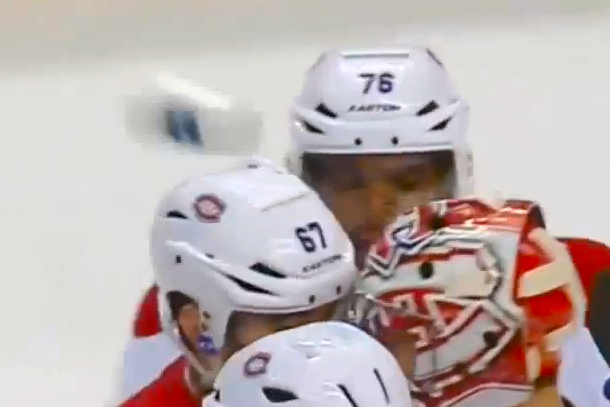 Last night, the Montreal Canadiens snatched home-ice advantage away from the heavily favored Boston Bruins with a thrilling double-overtime 4-3 victory.

The hero of the game? Well, netminder Carey Price certainly did his part, stopping 48 of the 51 shots he faced. But the bigger hero was defenseman P.K. Subban, who scored 50% of the Canadiens’ goals, including the game-winner.

Of course, this being one of the NHL’s oldest and most heated rivalries, the hero for Montreal is the villain for Boston. And after Subban scored the game winner, some drunken masshole douchebag in the stands let Subban know his efforts were not appreciated by throwing his (or her) beer cup at him.

Here is a video with three different television feeds of Subban’s game-winning howitzer. You’ll see the cup hit him at the 0:34 mark:

I’d like to say that I’m shocked that a Boston sports fan would do something like this, but that’s just not true. I’m pretty sure everyone outside New England finds Boston sports fans to be a little obnoxious. And we’ve seen this sort of thing before at TD Gardens. Remember when Celtics fans gave LeBron James a beer shower back in 2012?