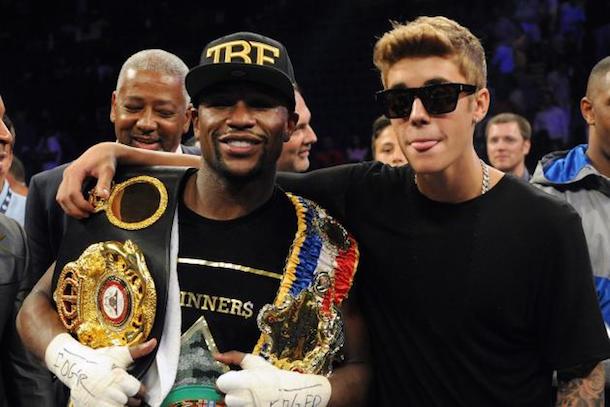 You thought it was weird when Floyd Mayweather had Justin Bieber in his walkout entourage for the Canelo Alvarez fight back in September? That was nothing. On Saturday, Mayweather will take on Marcos Maidana at the Wynn Las Vegas, and to get ready Money and the Biebs are hanging out at the spa getting massages and pedicures.

“Oh,” you say, “some paparazzo snuck into the spa and snapped some photos of them or something?”

Nope. You or I would probably be embarrassed to be associated with either one of these assclowns. Bieber is a drugged out douchebag and Mayweather is a convicted wife-beater. However, it seems both Bieber and Mayweather are actually proud of their special bromance, because they posted the damn video on Instagram.

Did you notice the look on Bieber’s face? It looks like he’s either really confused, or he’s taking a dump in his pants.

I vote dump in his pants.

Anyway, I’d tell you to root for Maidana this Saturday since Mayweather is a scumbag, but it doesn’t really matter. Win or lose the guy is getting paid at least $32 million.