After Power Outage, Thunder and Clippers Play Last 27 Seconds of First Half in the Dark (Video)
NBA

After Power Outage, Thunder and Clippers Play Last 27 Seconds of First Half in the Dark (Video) 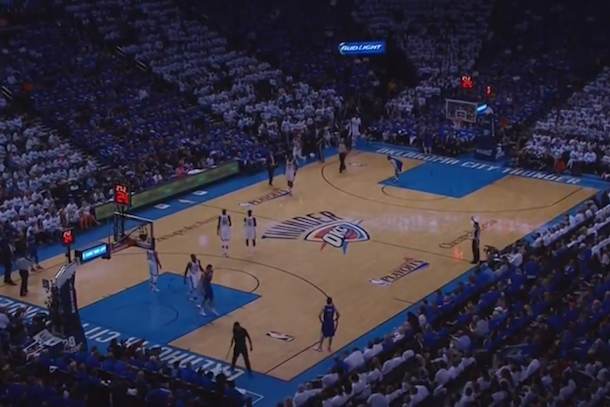 Last night, with 27.2 seconds left in the first half of Game 2 between the Thunder and Clippers, the lights went out at the ironically-named Chesapeake Engery Center in Oklahoma City.

It wasn’t quite as bad as the fiasco at Super Bowl XLVII, as not all of the lights went out. In fact, it was more of a dimming than a blackout. But still, it wasn’t exactly ideal.

The cause remains unknown. Marv Albert and future Knicks coach Steve Kerr speculated that it had something to do with the thunder storms rolling through the area. But I like conspiracy theories, so I’m going to say the facilities guy in charge of the lights didn’t get the memo that the Thunder’s Donald Sterling protest had been called off.

Whatever the cause, the weirdest part about the whole thing is that the teams agreed to finish out the first half with half the lights off.

Sure, Marv and Steve kept insisting there was plenty of light, but take a look at the quality of the play for those last 27.2 seconds and tell me the lighting situation wasn’t a problem:

Yep. That was weird.