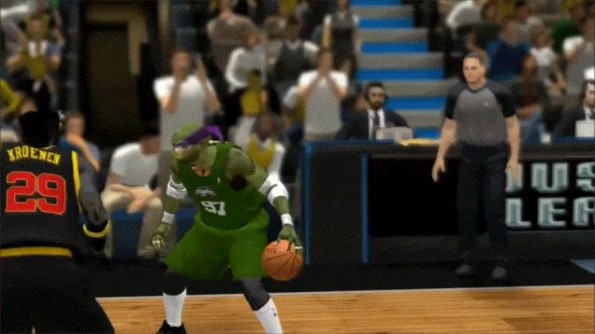 What would it take to jack up the sport of basketball to the next level of enjoyment? Would cartoon characters help? If so, you might want to check out at least a few minutes of a new NBA2K14 mod by MkEliteWorksX, featuring the Teenage Mutant Ninja Turtles (plus Casey Jones) going up against a team of villains from stuff like Hellboy, The Avengers, and more.

The “TMNT Ninja Turtles vs Villains in NBA 2K14” mod is also a valuable resource for anyone who has ever wondered what it would look like if a basketball player wore a cape. Unfortunately, we don’t get any locker room footage to see what Venom and The Joker talk about after the game, but we can’t have everything.

You can watch the Ninja Turtles fight evil on the basketball court in the video below. It’s 12 minutes long, so you might want to set some time aside to take it all in—as this would be a really embarrassing reason for your boss to chew you out.