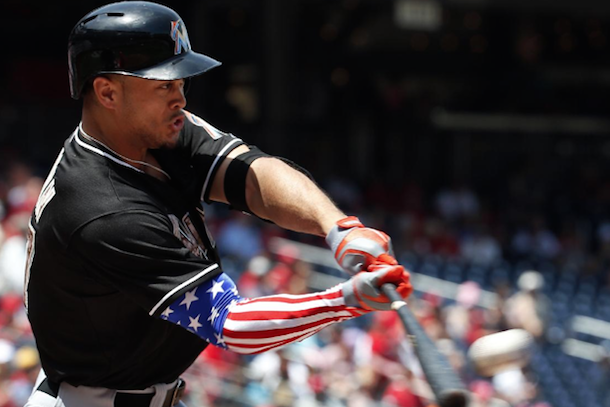 Yesterday, as you probably noticed, every team in Major League Baseball wore caps and jerseys highlighted by brown camouflage as a tribute to the men and women of the military who made the ultimate sacrifice for their country. And yes, that includes the Toronto Blue Jays, who wore the green camo of the Canadian Military, despite the fact that Canadians do not celebrate American Memorial Day.

Was the look aesthetically questionable? Yes, and that’s a pretty nice way of saying that, in most cases, the jerseys and hats were hideous. But the sentiment was great, and 100% of the proceeds from the sales of the special Memorial Day gear go to the Wounded Warriors project.

That sentiment wasn’t quite enough for the Marlins’ Giancarlo Stanton, though. In addition to the camo hats and jerseys, he also sported a stars and stripes arm sleeve on his right arm. And it clearly gave him Captain America-like super strength, because the guy hit a massive home run to straight-away center field off of the Nationals’ Tanner Roark.

And in case anybody was wondering, Stanton was born in California and is of Irish, African-American, and Puerto Rican descent. So he himself is a veritable melting pot.