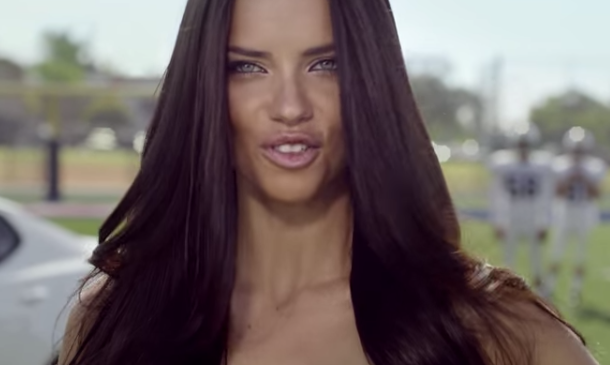 Confused by the title? Just watch the video below, which is actually a Kia commercial. In it, Adriana Lima tells teenage football players that “in her country” soccer is football.

Whatever you say, Adriana. You can tell me that the sky is canary yellow and that fish ride bicycles if you wear that outfit and speak in that accent. And I’m guessing it probably works the same way with a bunch of teenage boys.

Well, she may get me to renounce American football, but I really don’t see her selling me on a Kia. I think she would need to show up with Gisele Bundchen and Candice Swanpoel for that to happen.

(I’m hoping Kia reads this and gives us a pillowfight video with that trio.)

So give it up for Kia, Adriana Lima, teenage boys, American football, soccer, and the World Cup. There’s no reason why we have to be mutually exclusive here.