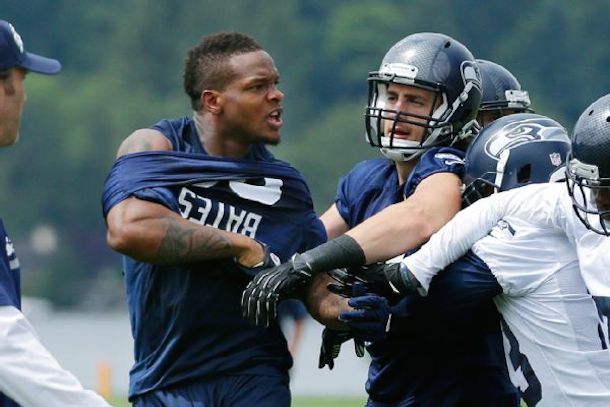 That’s not to say that the fight that broke out at Seattle’s minicamp practice yesterday was all Sherman’s fault. In fact, it was definitely not all his fault. It was actually an offense vs. defense thing that all started when free safety Earl Thomas roughed up wide receiver Bryan Walters during a no-tackle scrimmage, injuring Walters’s shoulder. However, on the very next play, Sherman lined up across from receiver Doug Bates, they grabbed onto each other, and pretty soon helmets were off and punches were flying. So, you know, Sherman didn’t do anything to help cooler heads prevail.

Of course, if you’re a Seahawks fan, you have to love the fact that the team is this hungry after winning the Super Bowl. This isn’t a case of guys genuinely hating each other. It’s a case of guys getting too worked up. By the end of practice, Sherman and Bates were bros again.