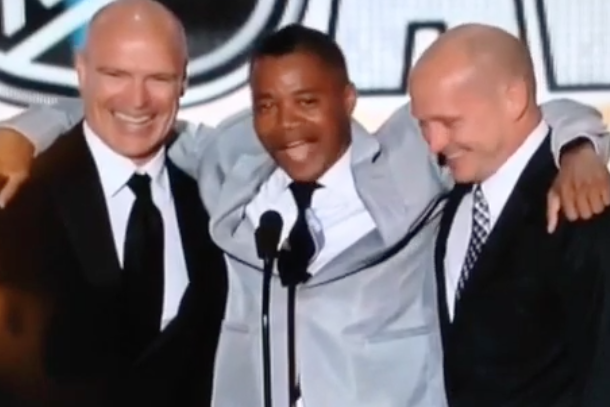 The NHL is the only one of the major North American pro sports leagues that hands out its postseason awards in an elaborate televised ceremony. Is this really necessary? Of course not. In fact, most years, despite the best intentions, the awards show is not really worth watching.

This year, however, was different. This year, they didn’t just get George Stroumboulopoulos, the new face of Hockey Night in Canada, to host. They also pumped presenter Cuba Gooding Jr. full of booze and set him loose on stage. And that was just a real treat for everybody.

Seriously, the dude was so awkward it was hilarious. And I’m not even going to attempt to describe it to you. Just watch and see for yourself.

I’m not sure whether the best part was Cuba telling Mark Messier and Adam Graves not to grab his ass, of Cuba hitting on Andrew Ference‘s wife.

It doesn’t really matter, though. The point here is Cuba Gooding Jr. earned himself a lifetime invitation to be a presenter at the NHL Awards. In fact, next year he and Andy Dick should co-host.