29 of the Best Luis Suarez Bite Memes and Tweets 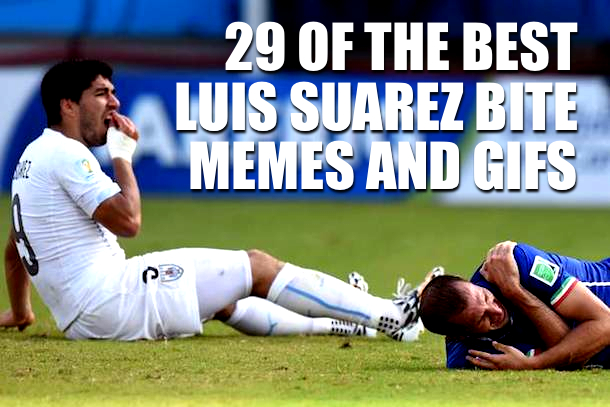 As soon as Luis Suarez took a bite out of Giorgio Chiellini yesterday during the final winner-take-all group stage game between Uruguay and Italy, you knew right away it would become an internet meme. After all, Suarez is one of the most polarizing figures in soccer, a guy who already had two biting suspensions in his career. And whenever something really crazy happens in the world of sports, the internet is all over it.

Of course, in this case, with the entire world watching a huge game in the world’s biggest sporting event, the meme exploded like a supernova. And today I’ve got a fairly comprehensive list of the best Suarez bite memes and tweets the internet could come up with.

Take a look, have a good laugh, and then take a moment to feel sorry for the good people of Uruguay. They’re team will likely be without their best player for the remainder of the tournament because he acts like a petulant toddler. 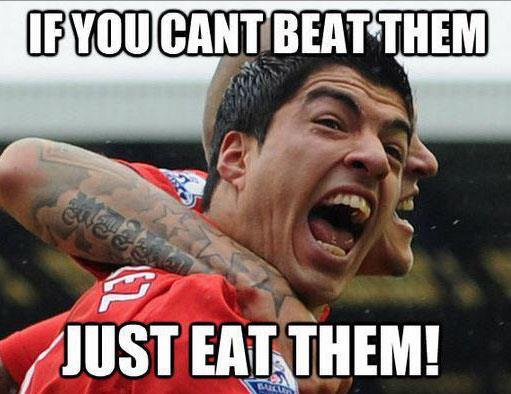 If you can't beat them, don't join them. That's for suckers. Eat them. They're delicious. 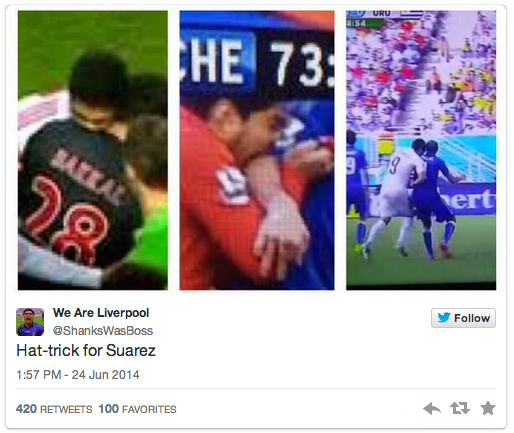 Hockey has the Gordie Howe hat trick. Soccer has the Suarez hat trick. 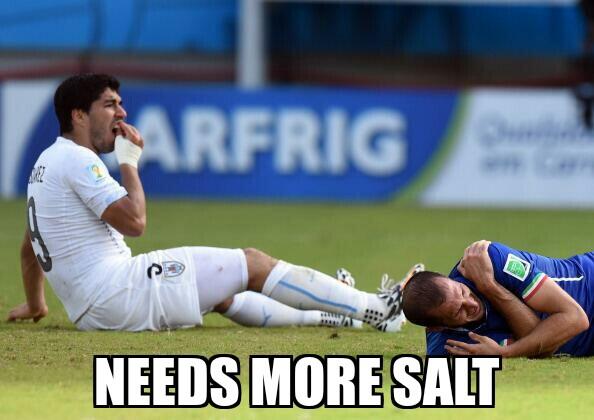 Actually, I'm surprised Suarez doesn't have his own special blend of herbs and spices. It would fly off grocery store shelves. 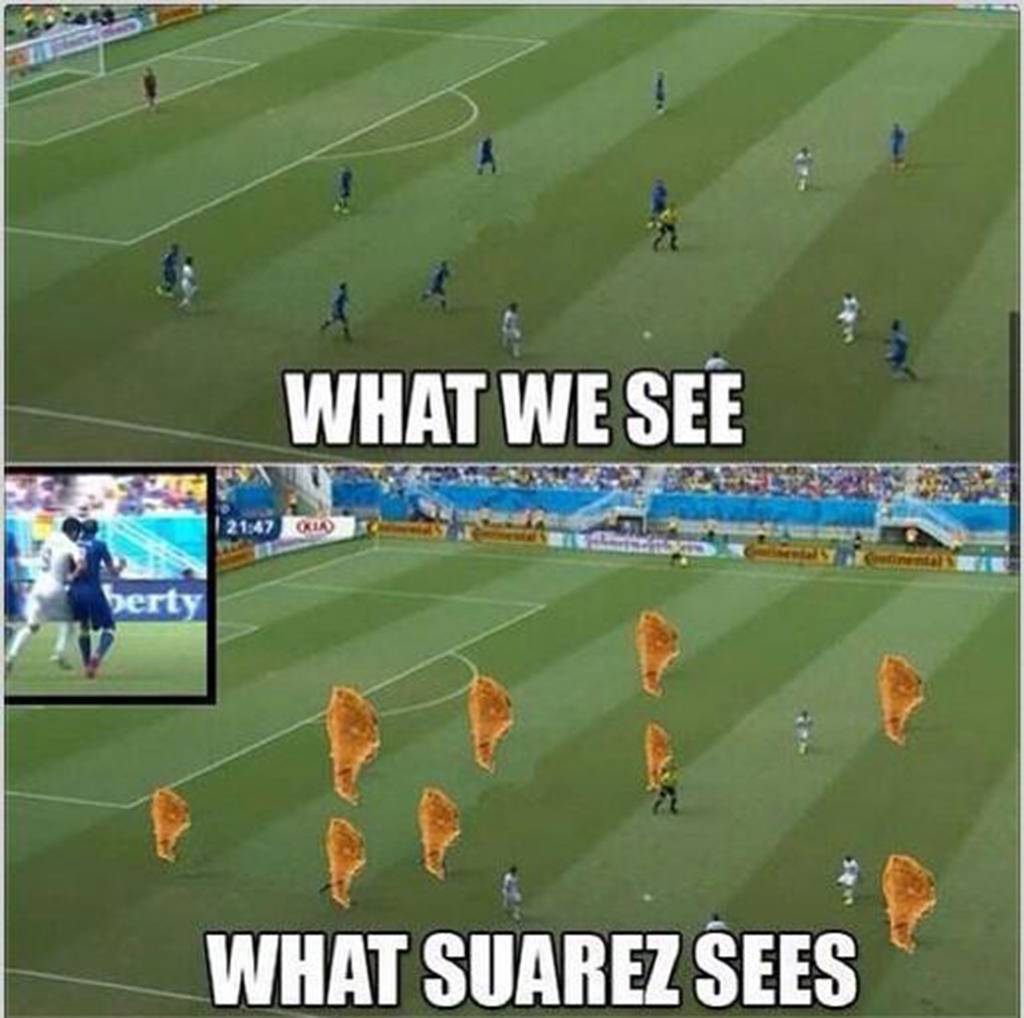 A nice effort, but the little inset of Suarez biting Chiellini isn't necessary. We all get why it's funny. 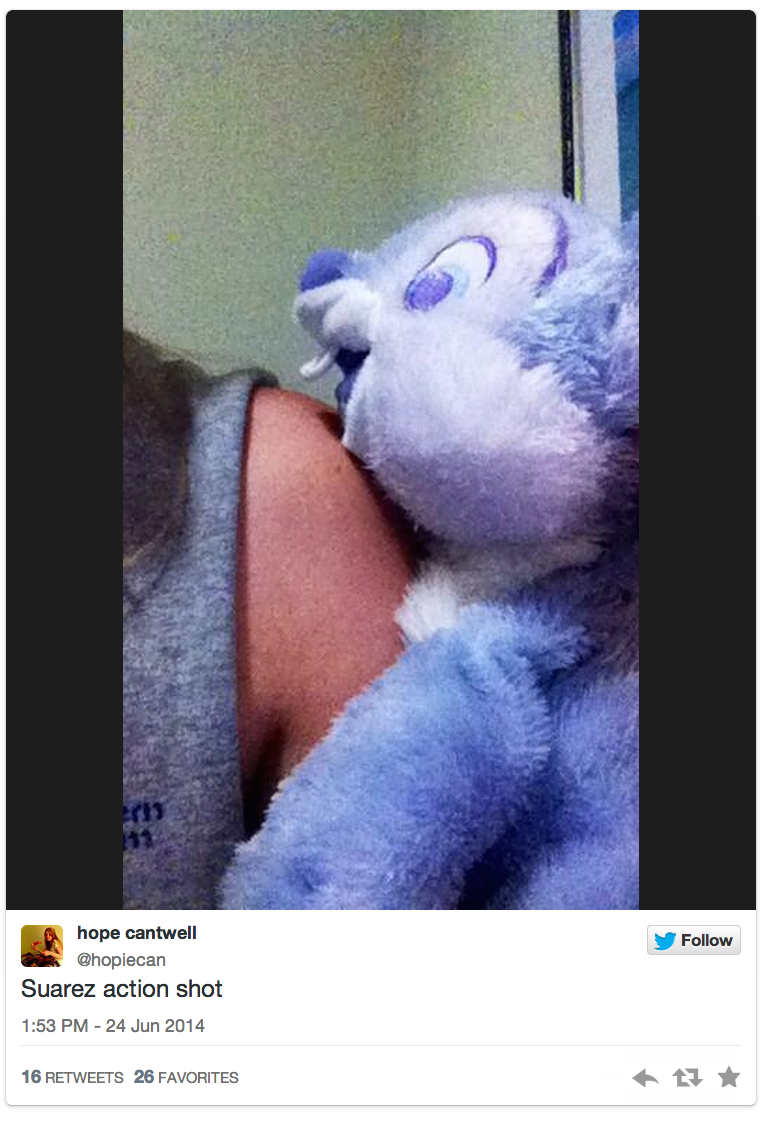 Funny, yes. But why does this person have a large purple stuffed chipmunk? 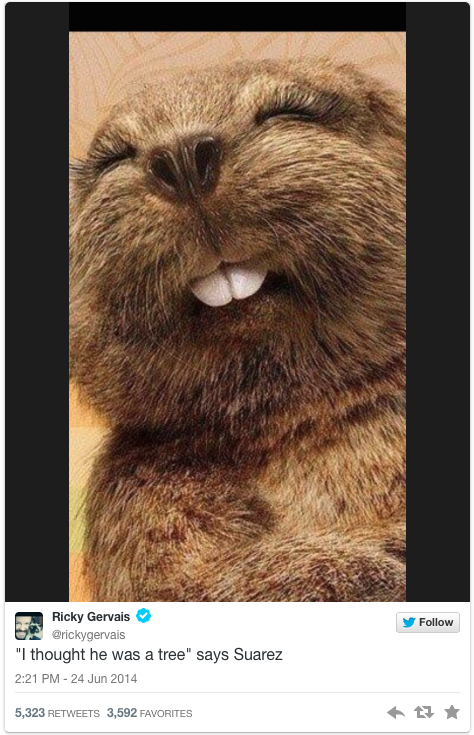 Ricky Gervais has a point. Suarez does resemble a beaver. Have you seen the guy's protruding teeth? 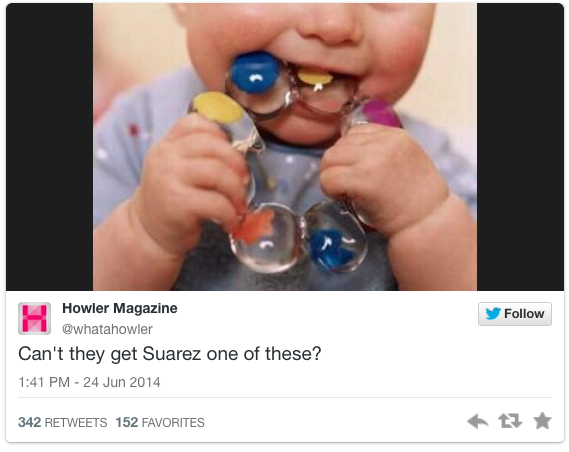 Actually, this should be FIFA's punishment. He can either be banned for the rest of the 2014 World Cup, or he could sit on the streets of Sao Paolo with a teething ring in his mouth for two hours. Let the man chose between going home early and totally humiliation. 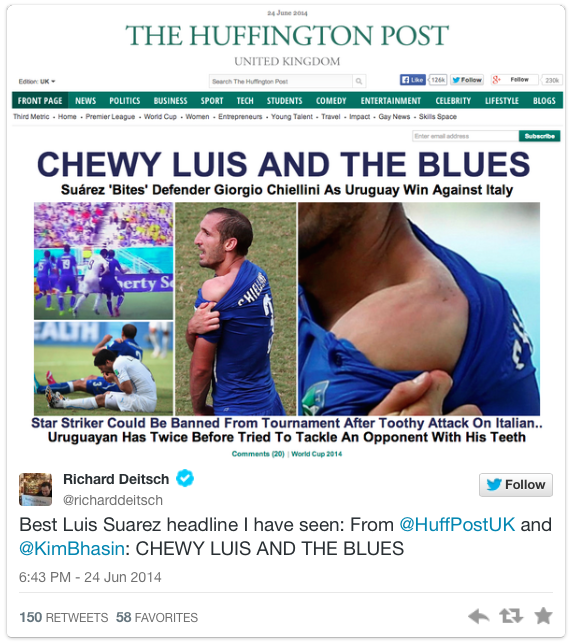 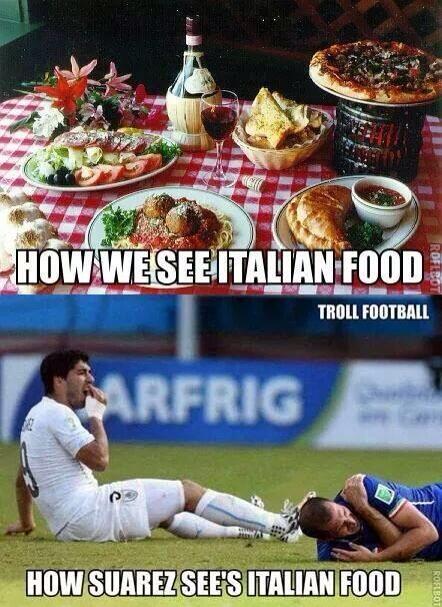 Think how much less funny this whole thing would have been if Suarez had bitten a Nigerian or something. 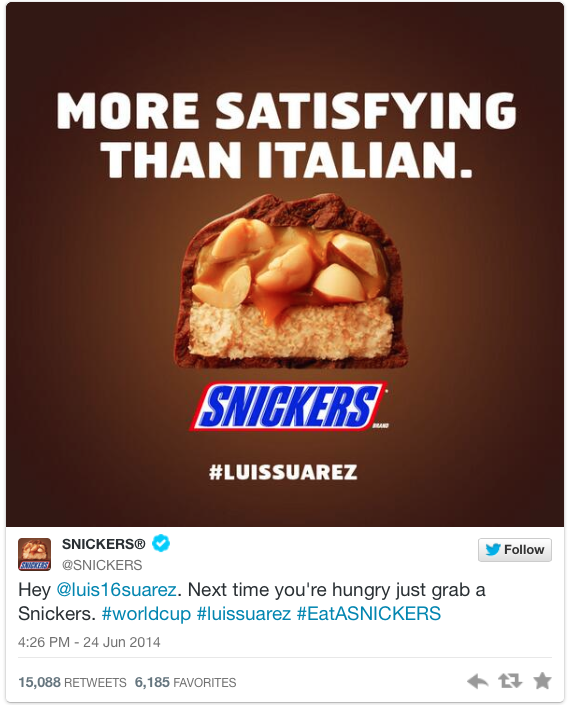 Damn, Luis Suarez, you just got owned by a candy bar. 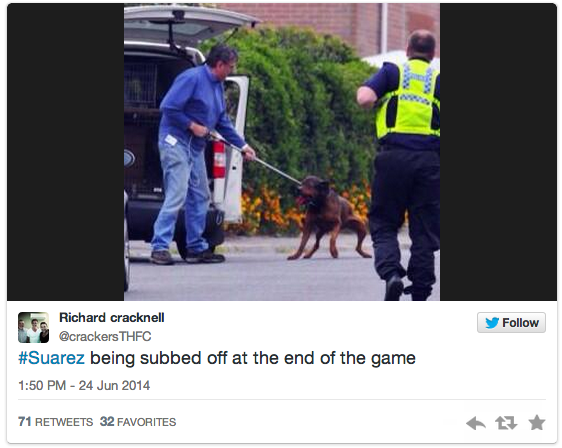 19. Suarez Being Subbed Off 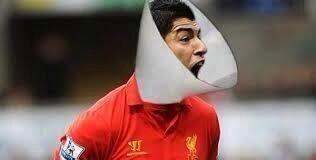 Very funny. But at the risk of bursting everyone's bubble, the cones prevent dogs from biting themselves when they have skin issues or scars. They can still bite others. 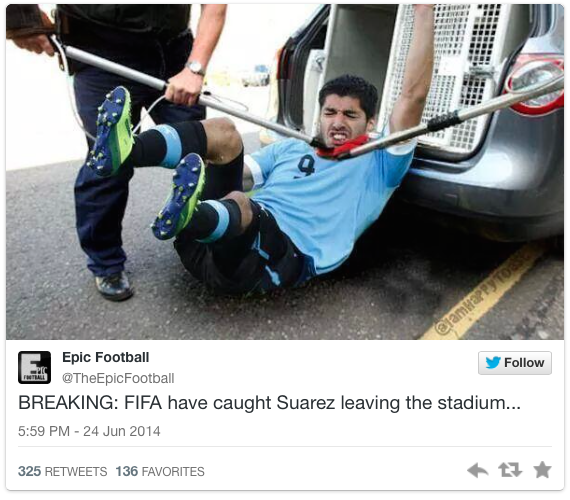 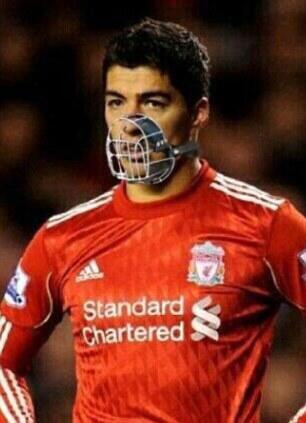 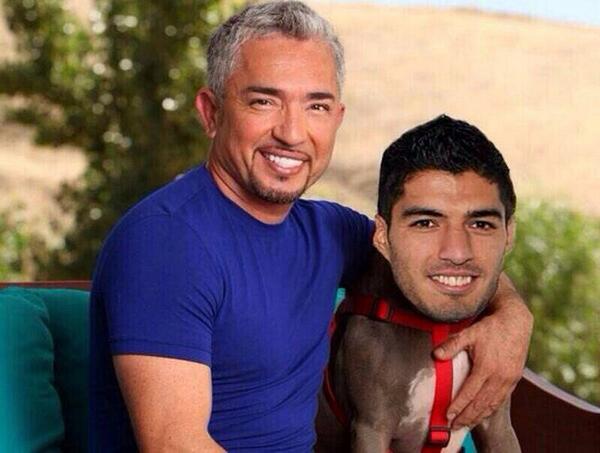 Cesar Millan always says he rehabilitates dogs and trains people. But what the hell would he do with Luis Suarez? 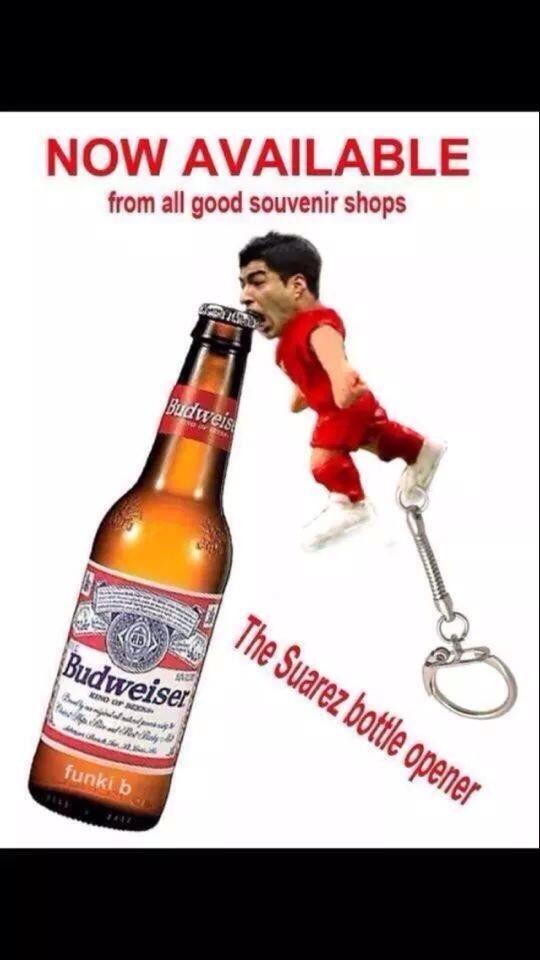 Come on, I know Budweiser if the official beer of the World Cup, but Buds have twist-offs. 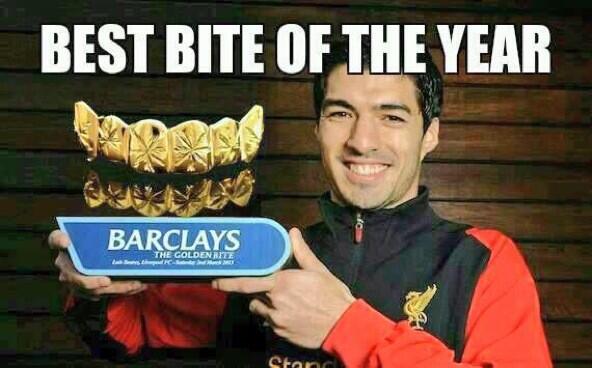 I'm pretty sure that's the grill Tuco wore on Breaking Bad. I don't know if Suarez is that crazy. 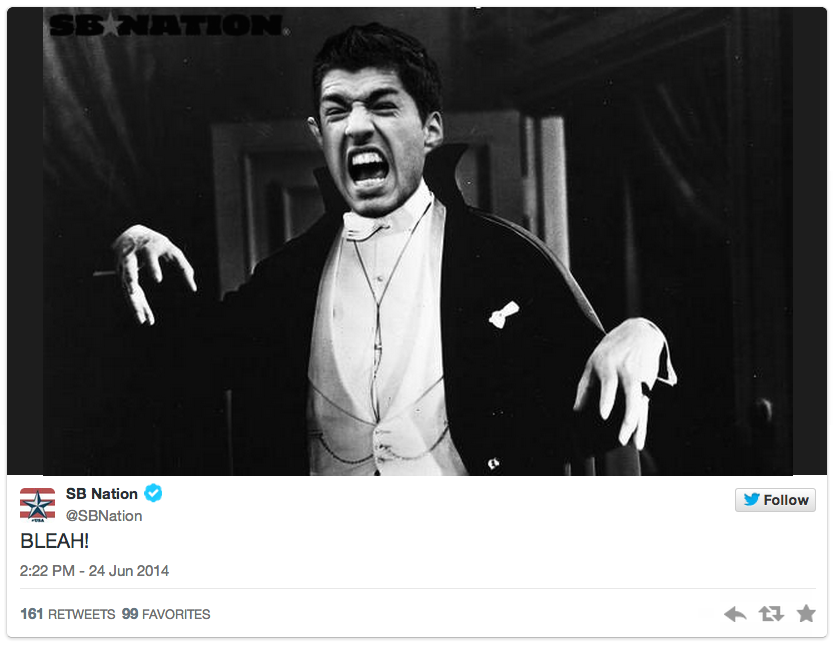 Nice effort, SB Nation, but Dracula usually has a nasty pair of fangs, too. 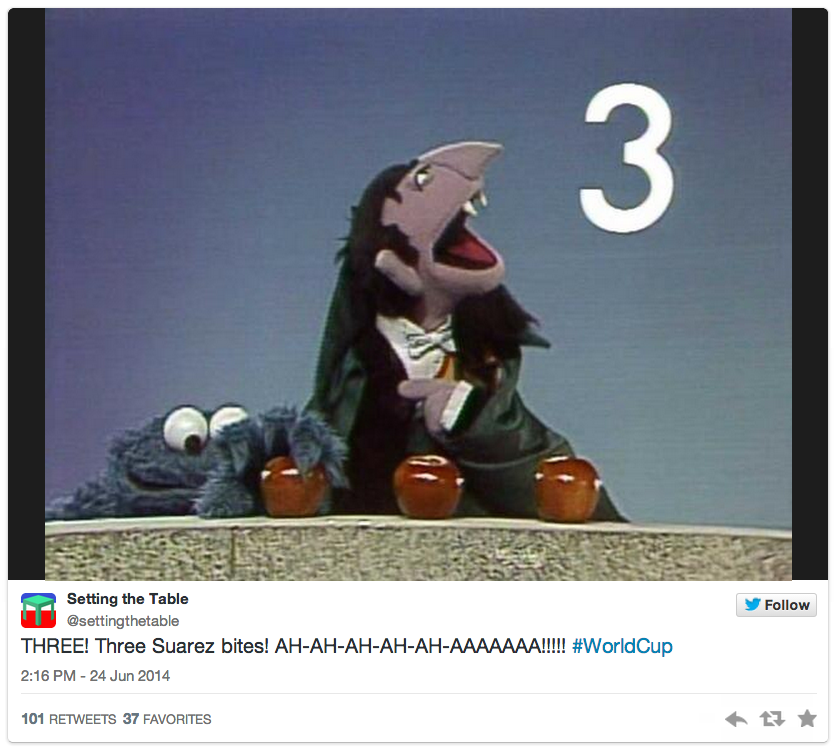 Actually, maybe Sesame Street can try to teach Suarez not to bite. That might work. 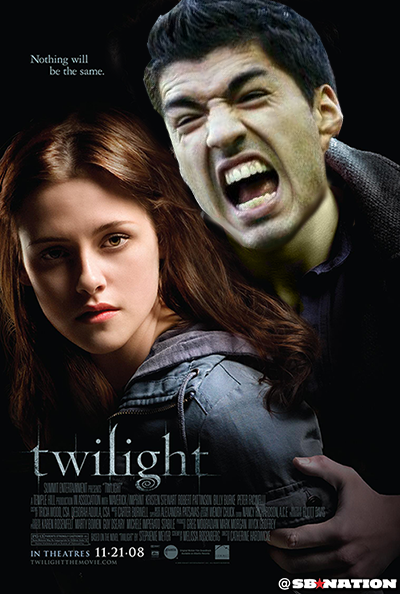 Still no fangs, SB Nation? Come on, get your sh*t together. 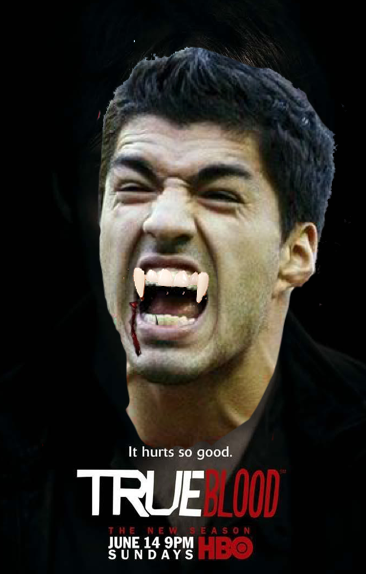 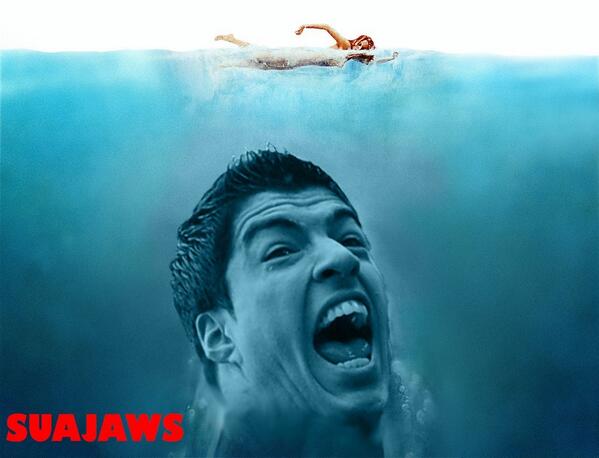 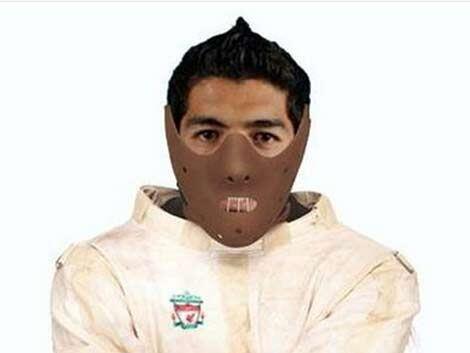 Hannibal Suarez or Luis Lecter. Either way, you get the idea. He likes to eat people with side of chianti and a nice glass of chianti. 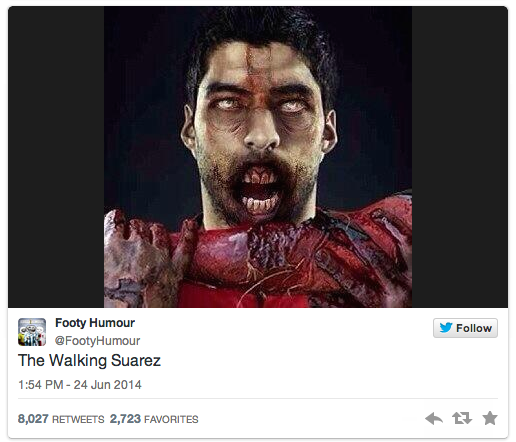 Epic photoshop. I don't know if @FootyHumour did it, but whoever it was has my utmost respect. 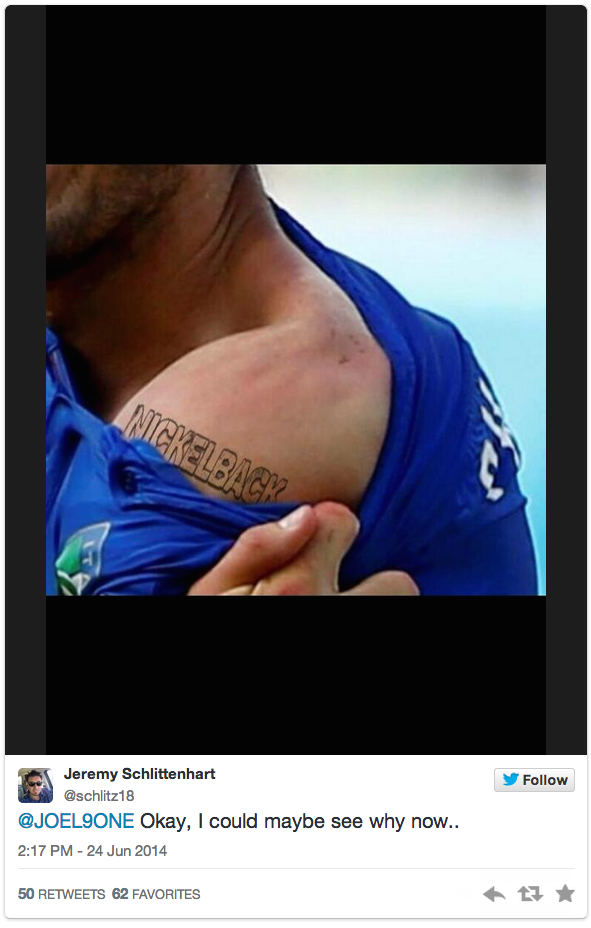 This one just goes to show you that Nickelback haters will never hesitate to slip a Nickelback burn into any conversation. 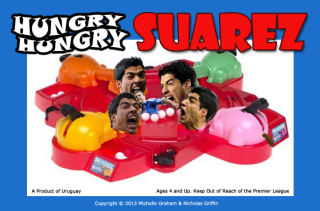 Suarez should totally sign a licensing deal so somebody would actually make this. It would make  great Christmas present for the soccer fan in our family. 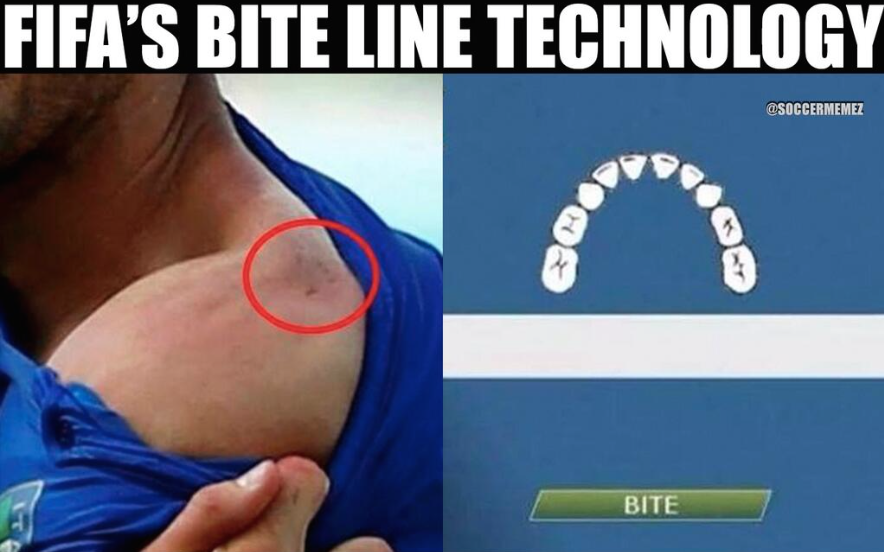 If the BBC commentators can't figure out goal line technology, I can only imagine the trouble they'd have with this. 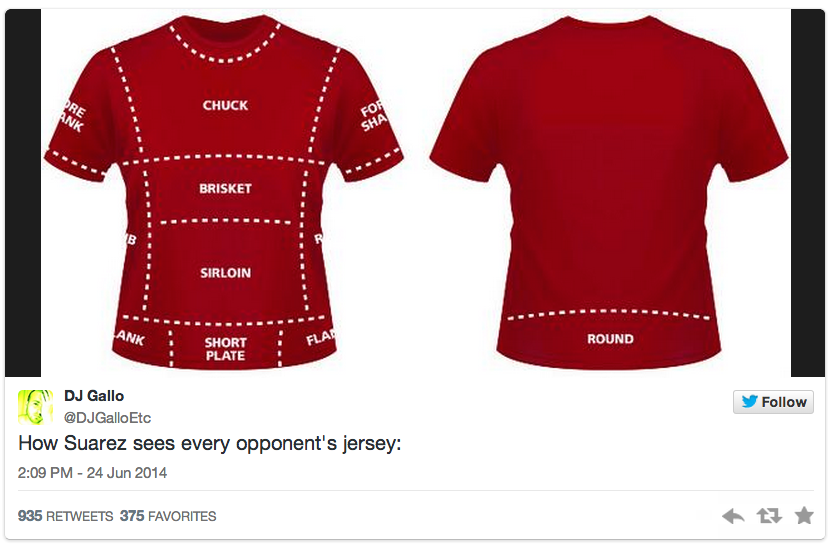 See, Giorgia Chiellini is actually pretty lucky Suarez didn't go for the brisket or sirloin. That would have been really painful.

2. Know Your Cuts of Meat

Of course, few people know more about the subject of getting bit during a sporting event than Evander Holyfield. And it did not take him very long to weigh in with the greatest tweet of his life. Well done, Evander. Well done.