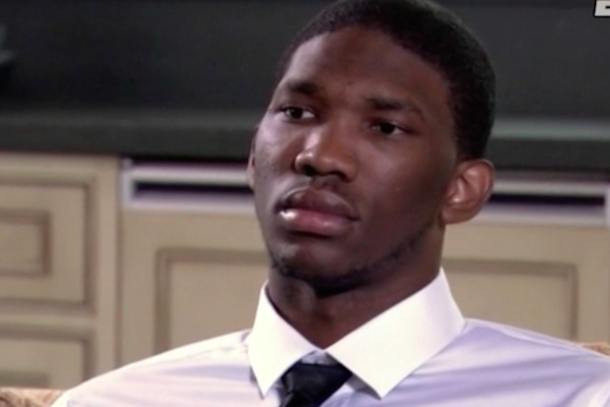 When it comes to the actual picks of the 2014 NBA Draft, there really were no big surprises. Everybody thought Andrew Wiggins, Jabari Parker, and Joel Embiid would go one, two, three, and that’s exactly what happened. However, that does not mean the draft was uneventful.

Let’s start with Joel Embiid, for example. He couldn’t be at the draft in person after having surgery on his right foot last week, so ESPN sent a camera to his house and cut to a live shot of him when the Sixers took him third overall.

Unfortunately, that “live shot” was via satellite and had a delay, so on TV it looked like he did not react at all. Which was hilarious, because Philly really sucks.

Later the team explained the obvious to the internet…

And Joel himself tweeted this picture of his real happy face… 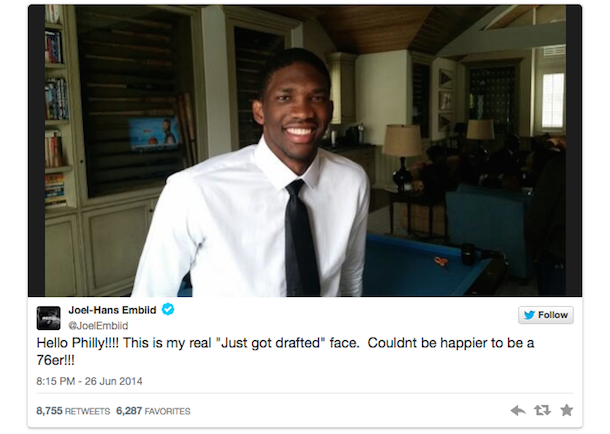 But that didn’t make the situation any less funny.

Also funny? The handshake fail of Nik Stauskas, who was selected with the No. 8 pick by the Sacramento Kings. You can’t blame the sharp shooter for wanting to celebrate getting drafted, especially seeing as how he went ahead of Doug McDermott.

But after pulling off a successful maneuvre with his dad…

But hey, so what if he slapped his former college coach in the face on national TV. At least people know who Nik Stauskas is.

In the biggest shocker of the night, the Toronto Raptors used the No. 20 pick in the draft to select some 18-year-old Brazilian kid nobody’s ever even heard of. And that prompted ESPN’s international basketball scout Fran Fraschilla to say this:

You hear that, Raptors fans? Fraschilla thinks Bruno Caboclo might be pretty good four years from now! Go ahead and pencil the championship parade in for June 2019.

Hat Tip – [For the Win and SB Nation]