Le’Veon Bell Goes Over the Middle to Catch a Pass in Steelers Preseason Game, Gets Flattened (Video) 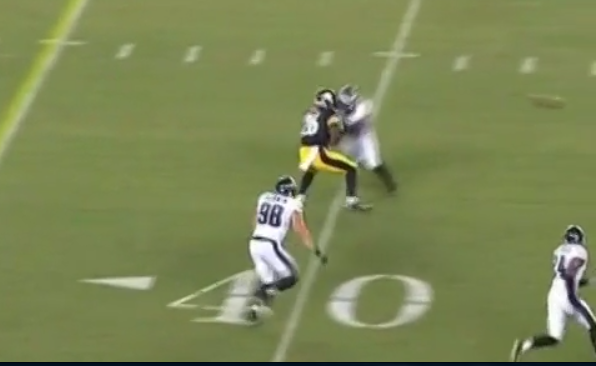 Receivers, backs, and tight ends should generally have a pretty good reason for crossing over the middle to catch a pass. The exposure and risk of injury is higher there than at any other spot on the field. Some good reasons to do it would include: getting separation from your defenders, having Keyshawn-like size to assert yourself, or really, really needing to make a play (3rd or 4th down).

There are no good reasons to do it in preseason, as Le’Veon Bell learned immediately after getting his clock cleaned by DeMeco Ryans during last night’s Steelers-Eagles preseason matchup.

Here the video. Feel your body clench about ten milliseconds before impact:

You want to admire his hustle and selflessness, but ultimately, this kind of play is a bad idea. No one benefits a team by getting injured. However, it’s hard to turn off instincts and reflexes in the preseason in the interest of self-preservation, so it’s understandable.

Seems like something of a paradox. The solution: wrap all non-rookies in bubble wrap for the preseason to ensure their safety. Who wouldn’t enjoy that?