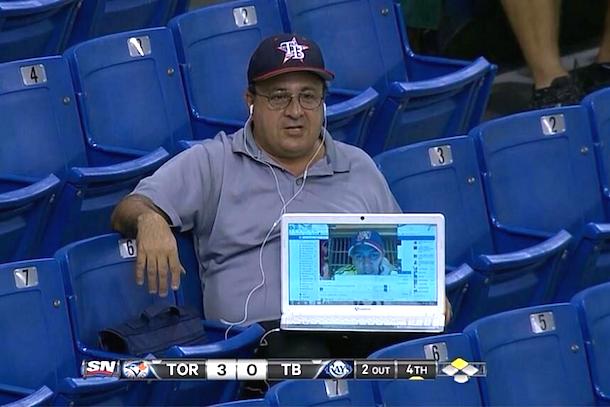 Every baseball fan has heard the disclaimer and probably knows it by heart. “Any reproduction, retransmission or rebroadcast without the expressed, written consent of Major League Baseball is strictly prohibited.”

Unfortunately, though, there is one Tampa Bay Rays fan who is either unfamiliar with that disclaimer, or didn’t think it applied to fans who want to broadcast games over Skype. Because he was doing just that last night at Tropicana Field during the Rays-Jays game, and after showing up on Toronto’s TV broadcast, the home team put the kibosh on it.

In fact, according to the Blue Jays television stats guy, the guy got kicked out of the game altogether.

@theScore Fan has since been removed, as he’s not a rights holder & didn’t have the right to live broadcast the game #Rays #BlueJays

@wes_chiasson @theScore That’s how it works. Just can’t have any chivato broadcasting games.

Now, I understand why Major League Baseball would have a problem with people broadcasting games via Skype. It violates the letter of the law, and if you overlook it, what’s to prevent someone from doing actual webcasts available to the entire internet, which would violate the spirit of the law as well?

That being said, the Rays aren’t exactly turning people away at the Trop. At last night’s game, for example, there were 10,000 people in attendance, and that was before a 30 minute delay caused by a power outage.

Kicking out a guy who actually wants to be there, and who’s so hardcore about the team that he brings a laptop so he can watch a game with his friend/son on Skype? Probably not a good PR move.