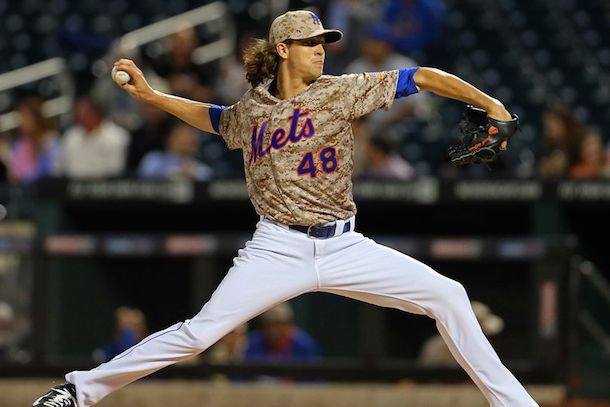 The New York Mets and their fans got pretty excited about rookie pitcher Jacob deGrom during spring training, and he has done nothing to rain on their parade this season. Through his first 20 big league starts, the 26-year-old righty is 8-6 and has a 2.62 ERA with 121 strikeouts over 127 innings. And since July 1st his ERA is just 1.86.

Now he’s gone and tied the modern Major League Baseball record for most strikeouts to start a game.

That record, fist set by Astros lefty Jim Deshaies against the Dodgers in 1986, is eight. Of course, Dsahaies’s streak eventually came to an end when Dodgers manager Tommy Lasorda decided he had seen enough and pinch hit for the pitcher in just the third inning. In deGrom’s case, unfortunately, the streak ended when he gave up a hit to Marlins pitcher Jarred Cosart.

Still, striking out eight batters in a row at any point in the game is impressive, and starting the game that locked in is just ridiculous.

When the Mets get Matt Harvey back next year, they’re going to have one hell of a one-two punch at the top of their rotation.

As for last night, deGrom went on to strike out an additional five batters for a career-high total of 13. But unfortunately he ran out of gas by the 7th inning, when he gave up three runs on three hits and two sacrifices.

At least he didn’t get the loss, though. That stat went to Jeurys Familia, who gave up another three runs the next inning right after the Mets had regained the lead.