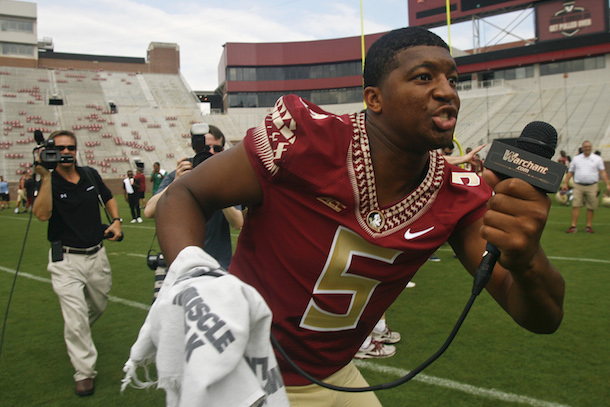 Back in January, a guy named John Cain perpetrated a pretty successful internet hoax that started a really weird trend. He uploaded a video to YouTube that showed a news reporter telling a camera operator that he’d “f*ck her right in the p*ssy,” only he didn’t realize he was on the air, and he got fired.

The whole thing was fake, of course. Cain himself was the supposed reporter. But people thought it was real, and Cain followed it up with two more videos in which a crusty old dude interrupted live news reports and said, again, “f*ck her right in the p*ssy.” So people thought this was just a funny thing that people were doing on live news broadcasts. And pretty soon, idiots were actually doing this—they’d get interviewed by a real reporter and then say “f*ck her right in the pussy” on live television.

Hell, it happened not once but twice during the 2014 FIFA World Cup alone.

That’s just…really weird. And also, probably not the best course of action for a guy currently being investigated for the alleged sexual assault of another student.

According to Fox Sports, now it’s also got Winston benched! FSU head coach Jimbo Fisher says Winston will sit out the first half against Clemson on Saturday as a result of his vulgar outburst. Meanwhile, a university spokesperson says Winston will be subject to “internal discipline.”

We all knew Jameis Winston was really good at football. But nobody ever said he was smart.