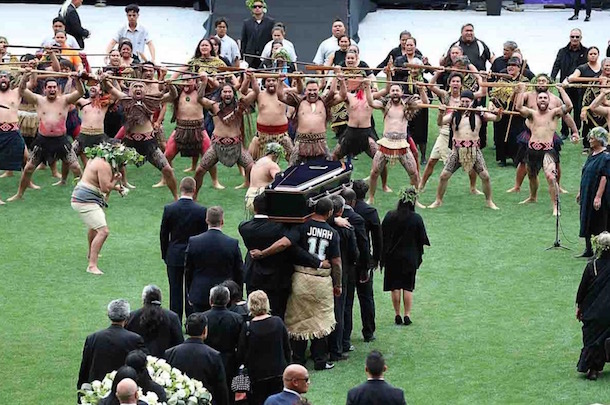 On November 18, Jonah Lomu, the most famous rugby player in world, died unexpectedly from a cardiac arrest brought on by a rare kidney condition. He was just 40 years old, only a few years removed from his playing days, and he left behind a wife and two young children.

It’s hard to describe how big a deal Lomu was in New Zealand, and how big a shock his death was to rugby fans around the world. Lomu wasn’t just a great player. He was a national hero, and his dominance helped grow the sport of rugby.

That’s why Lomu’s public funeral service at Auckland, New Zealand, on Monday resembled a state funeral. Held at Eden Park, the most famous rugby grounds in the most famous rugby country in the world, the service was attended by political dignitaries, the chairman of World Rugby, and dozens of famous players from New Zealand and around the world. And at least half of the 8,000 or so people in attendance were wearing #11 Jonah Lomu shirts.

Of course, Lomu himself was a Tongan New Zealander, not Maori. However, as a member of the All Blacks rugby team, he took part in many a Maori Haka dance in his days. So a group of people dressed in tribal attire performed a Haka as Lomu’s casket was brought into the stadium. Then a group of Lomu’s friends and former teammates performed another Haka as Lomu’s casket was carried out.

Jonah Lomu died too soon, and his friends and family and fans would give anything to have him back. However, there can be no doubt that he made the absolute most of his 40 years on earth and is leaving behind one hell of a legacy. Not everyone can say that.