Owner Of $100 Bill Autographed By Johnny Manziel Says He’s Already Been Offered $1,000 For It (Pic) 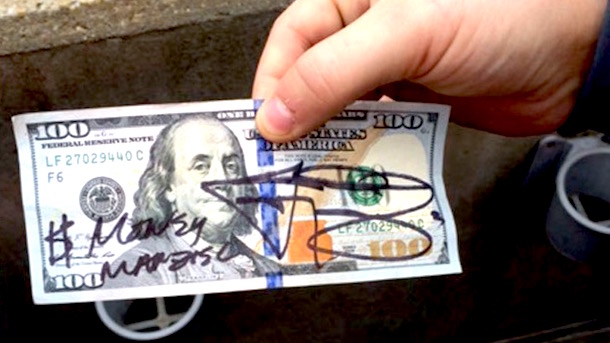 We now know the owner of that $100 bill autographed by Johnny Manziel prior to Sunday’s Browns-49ers game. His name is Caleb Leach. He’s from Columbus, Ohio. And, according to him, he’s received several offers for the unique piece of Browns memorabilia.

“We’ve had offers up to $1,000 for it on social media, but we don’t know if they’re legit,” Leach told ESPN on Tuesday. “We’ve heard from some auction memorabilia people, too. But I think we’re going to hang on to it and see what it’s worth.”

That’s probably a good idea. If Manziel actually goes on to become a star quarterback in the NFL, that autographed Benjamin might be worth a hell of a lot more than $1,000. However, if he turns out to be a total bust, it’ll still be worth $100. So waiting is kind of a win-win.