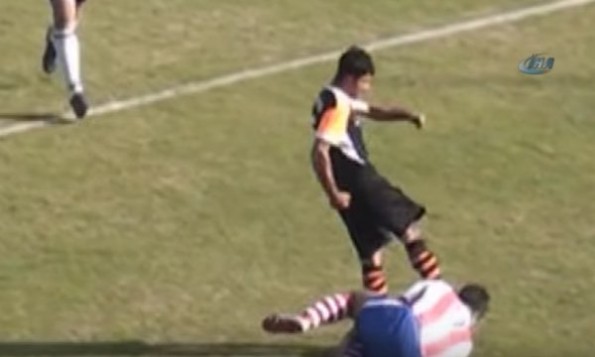 Prime example of when you let your emotions get the best of you and this soccer player found out the hard way after he received a red card. He didn’t accept the card, he decided to kick his opponent square in the face as if that would make it any better.

You can see it all unfold by checking the video clip above, and Daily Sabah has the additional details:

After the game, Karakaş told the press that he blacked out due to the kick, and he could have died. He pressed charges against Değirmenci for ‘attempted manslaughter’. …

“Thank god that kick came near my jaw. If it had hit me directly in the face, it could have broken my nose, made me blind or break my neck,” Karakaş said, adding that he has been suffering from serious neck pain and hasn’t been able to sleep for the last two days.

Speaking to the press after the incident, Değirmenci claimed that Karakaş cursed at his late mother during the charge and he could not control himself after the red card.