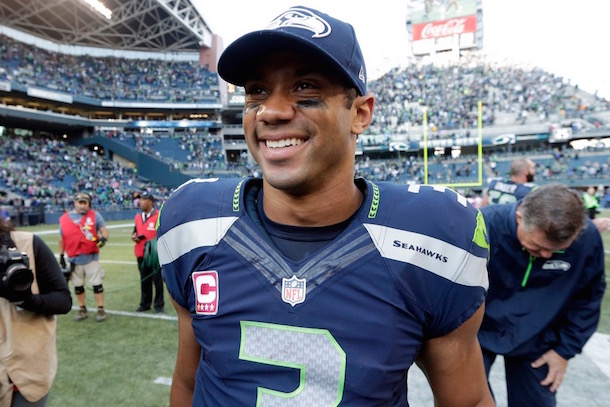 Say you want to write something romantic about the incredibly hot woman you love, but you’re not particularly creative or well-read. What do you do?

That’s right. You consult Google. And, as it turns out, the first thing that pops up when you search for “describing a beautiful woman” is a page called Describing a Beautiful Woman that has a variety of poetic descriptions of various female features. So it’s just perfect. Unless you’re incredibly famous and you publish your plagiarized poetry on social media. In which case somebody is bound to discover it and rat you out.

Just ask Seattle Seahawks quarterback Russell Wilson. On Wednesday he posted a sexy photo of his famous girlfriend, Ciara, along with a poetic caption about her sweet honey lips:

PM #WCW I kissed her & she had honey sweet lips that were lilac soft w/ a loving & affectionate personality @Ciara pic.twitter.com/qwxXkfWnCK

Needless to say, once the rest of Twitter got wind of Weiner’s discovery, they had a field day.

Russell Wilson sits on the toilet like AC Slater because he never googled how to pee.

Ciara: “What should we do tonight?” Russell Wilson: “Wikipedia defines a restaurant as…”

Russell Wilson is the wife from The Truman Show

When you’re searching for the right words to describe that special someone. https://t.co/l8AantegtV pic.twitter.com/1kkSA2df8I

Russell tried to do some damage control later, poking fun at his lameness by being even more lame:

Hahaha actually I prefer @Bing to describe my love… #StillCantFindEnoughWords

As you probably know, the Seahawks are owned by Microsoft co-founder Paul Allen, and Bing is one of the team’s corporate sponsors.