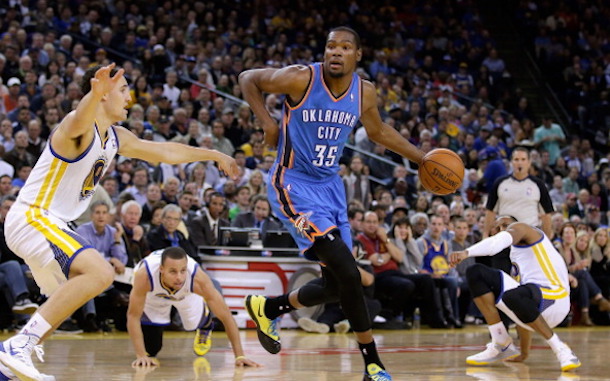 Believe it or not, it could be happening.

According to reports from Yahoo!’s Adrian Wojnarowski, league sources have told him that if the Oklahoma City Thunder can’t re-sign the all-star forward, the Golden State Warriors appear to be the front-runners for his services.

Of course, the Warriors can’t pursue anything at the moment, as doing so would be against the league rules. However, it is believed that Durant has plenty of interest in joining the Warriors should he reach free agency this summer, as it would give the 27-year-old his best chance at winning his first NBA championship.

Draymond Green seemed cool with the idea of the team adding another all-star in the offseason. Via Yahoo!:

“We’re all about winning,” Draymond Green told The Vertical. “One thing guys on this team don’t care about is who is getting the shots, or who is scoring. Guys definitely want to play here, play with us. We’re smiling. We’re having fun. You can tell that. I definitely think it’s become one of those places where guys will want to play.”

Of course, seeing Durant go to Golden State would probably turn the Warriors from almost-unbeatable to actually unbeatable.

Kevin Durant to the Warriors? Somebody kill me

If Kevin Durant signs with the Warriors in the offseason, does that mean Lil B will get on his jock? — John to the David (@StrictlyJohnD) February 2, 2016

Listen…. the sound of someone typing their “Maybe Kevin Durant wouldn’t be a good fit in the Warriors system” take — Luke Zaleski (@ZaleskiLuke) February 2, 2016

as a warriors fan I don’t personally want Kevin durant the warriors have a great chemistry right now that doesn’t need to be disrupted — Eddie Cuevas (@EmoneyCuevas) February 2, 2016

All of you guys are buggin the fuck out , @KDTrey5 will play for the @nyknicks next year !

Asked Chris Mullin if he’d keep this Warriors team together or get Durant: “Kevin Durant?” (Mullin smiles) “Bring him on”

tfw u hear durant could sign with the warriors pic.twitter.com/bdc1E4Bcur

If these two are together on the same team RIP to the NBA. Curry and Durant. pic.twitter.com/OxiZNglTD8