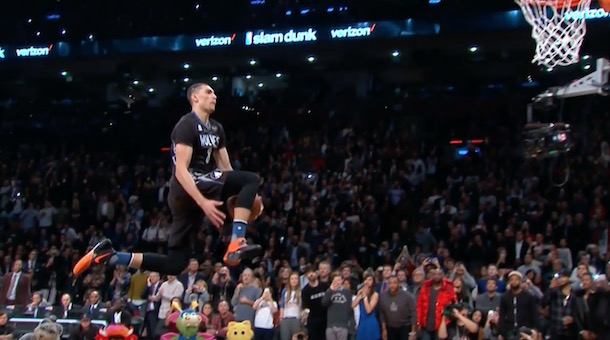 In what will likely be remembered as one of the greatest battles in the competition’s history, the Minnesota Timberwolves’ Zach LaVine outlasted the Orlando Magic’s Aaron Gordon to become just the fourth player ever to win back-to-back NBA Slam Dunk Contests.

After impressing with their opening round dunks, the two sophomores put on a show that won’t soon be forgotten during the final round.  Gordon kicked things off with a 360-dunk (assisted by the Magic’s mascot) which earned him a perfect 50, but LaVine responded with a 360 of his own that received the exact same score.

Then, somehow, they managed to kick things up another notch.

First there was Gordon going over the mascot and under his legs for something we’ve never seen before–and something that many thought should have won him the competition:

But, not to be outdone, LaVine answered with another 50 of his own after leaping from the foul line for a windmill dunk:

With the score tied after two dunks apiece, the two finalists were forced to dig deeper into their bag of tricks for a dunk-off.

First up, Aaron Gordon, who made it five consecutive 50s in the final round with this impressive bit of improv:

And once again, it was LaVine responding with yet another perfect 50:

Finally, during the fourth round of the finals, Gordon became the first to fall short of a perfect 50, leaving the door open for LaVine. And the defending champ answered with this:

Through the legs, from the free-throw line, for the win.

LaVine would end the competition with a score of 299 out of a possible 300 on his six dunks combined.

You can see all of LaVine and Gordon’s dunks in the video below: