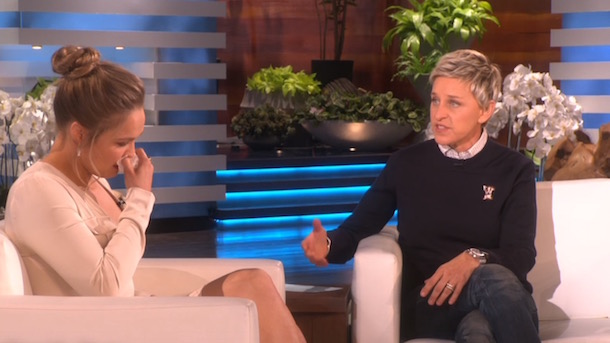 After hiding out for a while following her loss to Holly Holm at UFC 193 back in November, Ronda Rousey is back in the public eye as she looks to get her career back on track while preparing for a possible rematch sometime later this year.

The former UFC women’s bantamweight champ recently appeared on the set of The Ellen DeGeneres Show to discuss the results of her last fight. And during her interview, an emotional Rousey told Ellen about the moment she actually contemplated suicide while recovering in the hospital.

“Honestly, my thought I was like, in the medical room and I was down in the corner. I was sitting in the corner like. What am I anymore if I’m not this? And I was literally sitting there and thinking about killing myself and that exact second.”

“I’m like I’m nothing … what do I do anymore and no one gives a sh*t about me anymore without this.”

It’s pretty amazing to hear how someone can go from the highest of highs to the lowest of lows in a matter of seconds. Thankfully, Rousey has been able to overcome her injuries and any thoughts of suicide, and she now appears to be headed in the right direction on her comeback trail.

You can see Rousey discuss her struggles both during and after the Holm fight with Ellen in the video below: