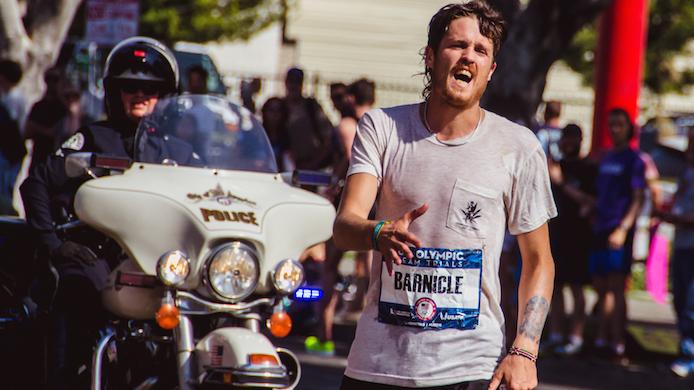 On Saturday in Los Angeles, 169 men took part in the U.S. Olympic Marathon Trials, and 105 actually finished what was reportedly a very difficult course.

The last guy across the line? A self-proclaimed stoner named Chris Barnicle. His time of 3:45:34 was pretty damn good for an amateur, but really quite bad for someone who managed to qualify for the Olympic trials. And that of course begs the question, how the hell did Barnicle qualify?

Well you see, Barnicle may be a cannabis advocate and edible marijuana wholesaler now, but in college he was an All-American in track, and after college he ran professionally for Asics and New Balance. He qualified for the Olympic Marathon Trials with an excellent half-marathon time of 1:04:29 back in 2013, but was forced to retire from running in 2014 when diagnosed with a stress fracture.

Banicle says he used marijuana throughout his running career, both recreationally and to treat Crohn’s disease. So when his running career was over, he basically decided to be a pro stoner. In August he cemented his unofficial title as “World’s Fast Stoner” by winning the 4.2-mile “Weed Run” at San Francisco’s 420 Games.

But what made Barnicle decide to actually use his Olympic Trials qualification, even though he had been out of competitive racing for over two years?

Convenience for one. The trials were held in L.A., and Barnicle lives in L.A. So that made it pretty easy. However, he also wanted to finish living up to his grandma’s legacy. According to family legend, she competed in the long jump trials back in the 1930s.

All things considered, Barnicle has a lot to be proud of. Finishing a marathon in under four hours in challenging conditions is actually amazing for somebody who didn’t even train. So Flo Track obviously wanted to know whether he partook in some bud before the race, just like old times.